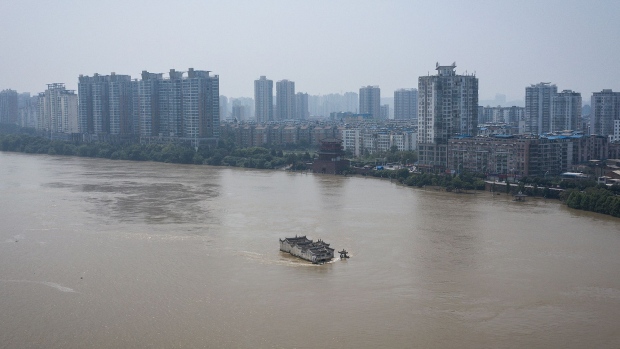 WUHAN, CHINA - JULY 24: (CHINA OUT) An aerial view of the Kwanyin Temple in the middle of the flooded Yangtze River on July 24, 2020 in Ezhou, Hubei province, China. The temple, on a rocky island in the mighty river, was first built in 1345AD, and collapsed and was rebuilt multiple times in history. (Photo by Getty Images) , Photographer: Stringer/Getty Images AsiaPac

(Bloomberg) -- China warned that the worst of the deluges that have led millions to be evacuated may be yet to come, after a third wave of floods formed in the upper reaches of the Yangtze River on Sunday.

“The flood control and flood fighting situation is severe,” China’s water resources ministry said in a statement. “The new peak may appear later.”

Authorities ordered the Three Gorges Reservoir to save its water-storing capacity in preparation for more flows, and forecast another three days of torrential rain in the southern region.

China’s south has been battered by severe floods after water levels reached records. More than 2 million people have been evacuated this month along the Yangtze River, Asia’s longest, with 142 dead or missing since the flooding began in June. It has also caused over 116 billion yuan ($17 billion) in damages, and impacted more than 2.4 million hectares (6.1 million acres) of crops in July.

The Three Gorges Reservoir is expecting water inflows to surge to about 60,000 cubic meters per second by about Tuesday. The reservoir level was at 159.46 meters as of Monday, down from 164.18 meters about a week ago. Its maximum capacity is 175 meters.