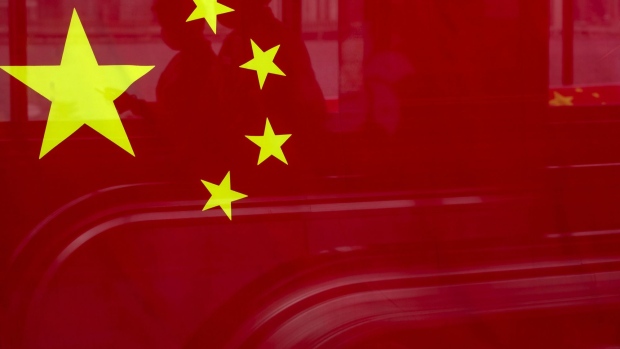 Pedestrians are reflected in a window as the Chinese flag hangs from buildings during the anniversary of Hong Kong's return to Chinese in Hong Kong, China, on Thursday, July 1, 2021. Hong Kong's leader pledged to press ahead with an unprecedented national security crackdown, as the Asian financial center marked a series of fraught anniversaries symbolizing Beijing’s tightening grip over local affairs. Photographer: Paul Yeung/Bloomberg , Bloomberg

(Bloomberg) -- A Chinese court sentenced a former top security official to life in prison, completing a crackdown on the “political clique” he led just weeks before a crucial Communist Party reshuffle.

Former Vice Public Security Minister Sun Lijun, 53, was given a suspended death sentence with no possibility of parole by a court in Changchun city, Jilin province, state broadcaster China Central Television reported. He was found guilty of taking 646 million yuan ($91 million) of bribes, as well as stock manipulation and illegal gun possession, the report said.

While the report made no mention of Sun’s political dealings, the party’s top disciplinary body had previously accused him of “cultivating personal power and forming an interest group.” He was also found to have been dereliction of duty during Covid outbreaks in early 2020, and was accused of releasing confidential documents.

Another two people associated with the group -- former justice minister Fu Zhenghua and Wang Like, who was a senior official in Jiangsu -- were similarly given suspended death sentences Thursday.

The verdicts underscore Chinese President Xi Jinping’s willingness to take down high-ranking party officials ahead of a key congress in which he is expected to secure a precedent-breaking third term in power. The gathering set for Oct. 16 in Beijing will decide the party’s leadership line-up for the next five years.

Since taking power in 2012, Xi has waged a unprecedented corruption campaign that has swept up scores of top officials including retired security czar Zhou Yongkang. Before the last congress in 2017, Xi expelled and prosecuted Poltiburo member Sun Zhengcai.

In July 2020, China launched a nationwide anti-corruption campaign targeting the justice system. A handful of high-profile law enforcement figures are being jailed as a result of that probe, which ensnared more than 170,000 officials and police officers.

Sun Lijun was found to have illegally sought promotions for others after taking bribes, CCTV said, citing the court. He also intervened in medical and financial sectors, it said, without elaborating.