What we know about the Coronavirus so far

China ramped up efforts to contain a respiratory virus that’s killed at least 17 people and infected hundreds as the outbreak spread beyond Asia.

State broadcaster CCTV reported that the death toll has nearly doubled from a previous total of nine. There were two “preliminary positive” reports of the pneumonia-causing virus in Hong Kong, with one diagnosis in the U.S. and patients under examination in Mexico and Russia.

Health officials around the world are racing to control the SARS-like virus that first appeared last month. The World Health Organization will decide Wednesday whether to declare the outbreak a public health emergency of international concern, a designation used for complex epidemics that can cross borders.

One 39-year-old Hong Kong patient was found by temperature screening after traveling from Wuhan to Shenzhen, and then to Hong Kong via rail, according to Sophia Chan, Hong Kong’s secretary for food and health.

While final test results are still forthcoming, the man’s case is “highly suspicious,” according to Constance Chan, head of Hong Kong’s Department of Health. Four family members who didn’t have symptoms stayed overnight at a hotel in a popular tourist area and then departed for Manila.

In a briefing in Beijing Wednesday, health officials said China has stepped up monitoring of transportation links and ordered a near-complete shutdown of Wuhan, where the virus originated. Officials acknowledged that they’re still grappling to understand the pathogen, which has infected multiple medical workers.

“We are still on a learning curve,” said Gao Fu, head of Chinese Center for Disease Control and Prevention. “The disease will continue to develop.” It has already changed from the early stages of detection, he said in the briefing.

China said it had seen no evidence yet of “super spreaders,” infected people who pass on the disease rapidly to many other people, but could not rule out that some would emerge. Super spreaders played a key role in the SARS pandemic 17 years ago, which killed almost 800 people and hurt economies across the region.

There have been 473 confirmed cases of the virus in China, according to CCTV. The 17 deaths have been in Hubei province, whose capital is Wuhan, a city of 11 million people, the broadcaster said. 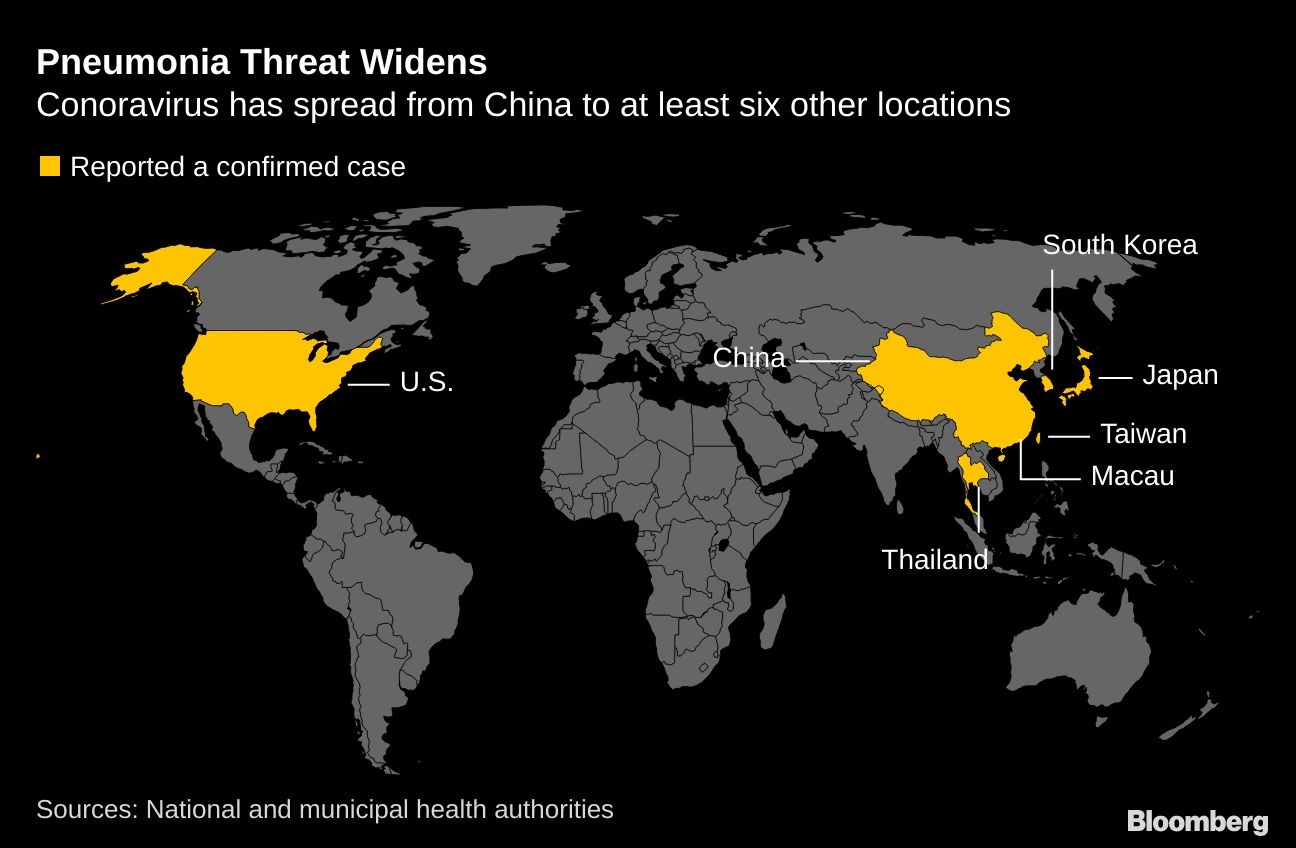 Many of the victims had pre-existing medical conditions, suggesting the virus poses the greatest danger to people whose health is already compromised, while children and younger people are not as easily susceptible. Symptoms include fever, cough or chest tightness, and difficulty breathing.

Both the Wuhan virus, known as 2019-nCoV, and SARS belong to the family of coronaviruses, so called because of their crown-like shape. Many such viruses cross the barrier between animals and humans.

Gao said in the Beijing briefing that the source of 2019-nCoV was wild animals sold in so-called wet markets. Some of the first group of patients in Wuhan worked or shopped at a seafood market where live animals and wildlife parts were reportedly sold.

A declaration of a public health emergency is reserved for extraordinary circumstances, according to the WHO. It can help mobilize an international response and focus government attention. The body most recently declared such an emergency last year, as an Ebola outbreak worsened in Congo.

An emergency declaration for the Wuhan virus case could include recommendations to restrict travel or trade. Such a move would come as concern grows that the virus could spread rapidly during China’s Lunar New Year break, which starts at the end of this week. Hundreds of millions of people are poised to travel for the holidays in the biggest annual migration of humans on the planet.

The WHO has formed teams at its Geneva headquarters to study the virus, its spread and its symptoms and is sending experts to China to help gather information, according to David Heymann, an infectious disease researcher in the U.K. who advises the agency.

As they did during the SARS and Ebola outbreaks, health officials and scientists globally are tracking patients and testing samples of saliva and other fluids to determine the exact cause and severity of their ailments. They’re identifying and monitoring people with whom the patients were in contact to see if the virus is spreading easily from person to person. And they are placing restrictions on travel to try to limit the exposure to scores of new people.

The U.S. Centers for Disease Control and Prevention, or CDC, expanded its inspection of airline passengers who had spent time in China to airports in Atlanta and Chicago on Tuesday, building on the 1,200 people who had been screened in California and New York over the weekend. No new cases were uncovered.

The U.S. case is a man in his 30s who was traveling in Wuhan and arrived back in the U.S. on Jan. 15, Washington state health officials said on a call with the CDC Tuesday. The resident of Snohomish, Washington, said he hadn’t spent any time at the live-animal market where the virus is believed to have originated and didn’t have contact with anyone who was sick.

The man sought care quickly after monitoring news about the virus and is in good condition, though he has been hospitalized out of an abundance of caution, the officials said.

President Donald Trump told reporters at the World Economic Forum in Davos that the U.S. has a plan to deal with the virus.

U.K. health officials raised the risk level of the virus to low from very low and issued guidance to airports. The focus of concern is about three flights a week that arrive from Wuhan at London Heathrow, according to a statement from the Department of Health and Social Care.

A message will be broadcast during those flights to encourage reporting of illness, and the planes will be received in an isolated area of the airport. Passengers will be met by Public Health England and airport officials who will check for symptoms and provide assistance information as needed, with Chinese language speakers on hand, according to the statement.

So far, the virus has spread beyond China to the U.S., South Korea, Taiwan, Japan and Thailand, with the latter country reporting four confirmed cases. Macau, a Chinese territory that’s the world’s biggest gambling hub, also reported its first case on Wednesday.

“This is an evolving situation,” said Nancy Messonnier, director of the CDC’s National Center for Immunization and Respiratory Diseases. “We do expect additional cases in the United States and globally.”