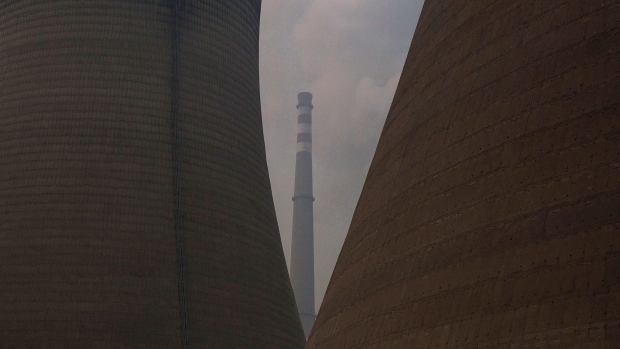 BEIJING, CHINA - NOVEMBER 27: A coal fired power plant is seen on November 27, 2015 on the outskirts of Beijing, China. China's government has set 2030 as a deadline for the country to reach its peak for emissions of carbon dioxide, what scientists and environmentalists cite as the primary cause of climate change.æ At an upcoming conference in Paris, the governments of 196 countries will meet to set targets on reducing carbon emissions in an attempt to forge a new global agreement on climate change. (Photo by Kevin Frayer/Getty Images) , Photographer: Kevin Frayer/Getty Images AsiaPac

A wave of new coal power plants are under construction or in development after the country lifted curbs on new builds, according to a study published Tuesday by Greenpeace.

About 46 gigawatts worth of new plants were under construction as of May, the study said. Another 48 gigawatts were under various stages of development, Greenpeace estimated.

About 29.9 gigawatts of new coal power capacity was added last year, making a total of about 1,040 gigawatts, according to China Electricity Council data.

China remains coal’s stronghold even as consumption of the dirtiest fossil fuel wanes elsewhere in the world. The nation mines and burns about half the world’s coal and views it as an important source of cheap power and mass employment.

A spate of coal plant constructions in the early part of the decade led to overcapacity, and by 2016 the National Energy Administration ordered 28 of the country’s 33 regional governments to suspend or delay new plants. Those restrictions have been lifted in recent years, with only six regions expected to have excessive capacity by 2023.