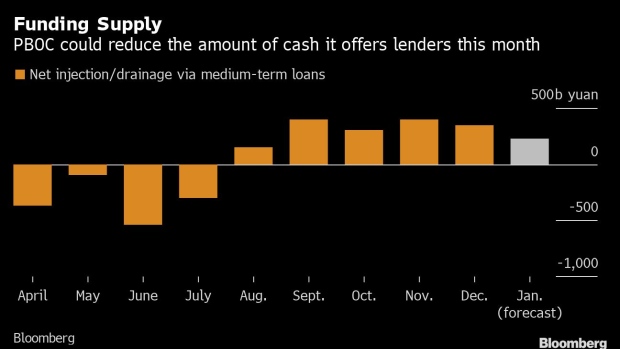 (Bloomberg) -- China’s central bank will likely reduce the amount of one-year cash it offers lenders this month after excess liquidity pushed an interbank borrowing cost to an all-time low.

The People’s Bank of China is expected to pump some 770 billion yuan ($119 billion) of medium-term loans into the financial system Friday, according to the median forecast in a Bloomberg survey of six analysts. While that will more than offset the amount coming due this month, the resulting net injection of 230 billion yuan will be the smallest since August.

A smaller operation would signal that the PBOC’s monetary easing of the past two months is nearing its end. While the policy has helped repair sentiment in China’s credit and government bond markets, injecting too much cash risks further stoking leverage in the financial system.

Evidence that liquidity is too loose is showing in a popular tool used by traders to finance their bond purchases. Market rates were so low -- and demand to borrow was so intense -- that daily turnover in overnight repurcahse agreements touched a seven-month high earlier this month.

As China’s economic recovery from the pandemic gains firmer footing, authorities have repeatedly signaled the need to repeal stimulus measures deployed last year. Beijing is keen to stabilize borrowing after the country’s debt surged to a record 277% of total output in August.

“Buying bonds is becoming a risky trade -- the yield will climb as liquidity in the banking system will likely dwindle,” said Xing Zhaopeng, an economist at Australia & New Zealand Banking Group. “The recent mini easing cycle could end at any time.”

The PBOC typically pumps more liquidity into the financial system before the Lunar New Year holiday, which in 2021 falls in mid-February. That’s because residents tend to withdraw cash to pay for travel and gifts. Last year Beijing reduced the amount of capital lenders need to hold in reserve, freeing up about 800 billion yuan. It made a similar move in 2019.

A series of high-profile corporate defaults rippled through the interbank market at the end of last year, forcing the central bank to take action. The PBOC added 550 billion yuan of one-year funding to the banking system in the closing weeks of 2020, avoiding a funding crunch that was also wreaking havoc on the government debt market.

Chinese lenders will need less cash on hand than last year to pay for newly issued debt, of which they are the biggest buyers. Governments at the central and local levels will sell 1.62 trillion yuan of bonds in the first quarter, a drop of about 30% from the same period last year, according to estimates by strategists at Nomura International Hong Kong Ltd.

Lenders are also facing less repayment pressure on their interbank debt, with this month’s maturities set to be the lowest since April. The recent spike in virus cases in some provinces may discourage Chinese residents from travelling over the holiday period, potentially reducing the demand for cash.