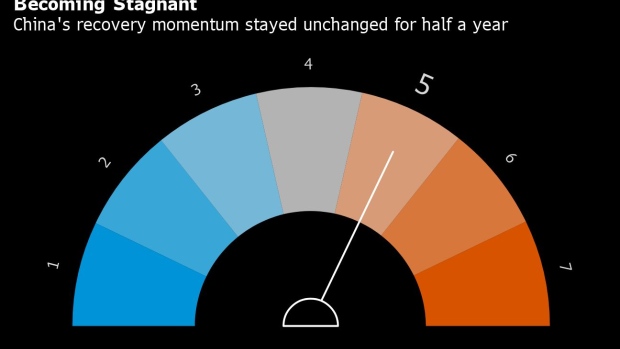 (Bloomberg) -- China’s economy is showing signs of a further slowdown with car and housing sales dropping again this month even as exports continue their strong performance and the government seeks to allay concerns over growth.

That’s the outlook from Bloomberg’s aggregate index of eight early indicators for October. While the overall number stayed unchanged, under the surface there was a continued deterioration in some of the real-time economic data.

Economic growth was already lower last quarter, partly due to a higher base of comparison from a year ago, but also dragged down by power shortages, repeated Covid outbreaks, and turmoil in the housing sector. The government and central bank have signaled they’re not rushing to counteract that with stimulus, prompting a number of economists to cut their growth forecasts for this year and next.

Real-estate sales dropped again, as buyers hold back due to concerns about which companies will survive the current debt crisis facing China Evergrande Group and other developers. Car sales also fell in the first three weeks of the month, continuing the slump of the past five months. The industry has been hit by both weak demand and a shortage of necessary computer chips.

However, the export sector has continued to support the economy, posting monthly growth rates of at least 10% for the last 12 months, and reaching a record $306 billion in September. That expansion looks set to continue for a while at least, with South Korean exports expanding 36% so far this month.

Despite government efforts to control rising prices, factory-gate inflation shows no signs of easing this month, with a set of data tracked by Bloomberg Economics surging to the highest level on record. The official producer price index rose the fastest since November 1995 in September, hitting profits and causing losses at electrical power companies, further worsening the power shortage.

Confidence among small and medium-sized enterprises fell in October, with the performance sub-index dropping for a sixth straight month and the growth momentum indicator hitting an eight-month low, according to a survey of more than 500 companies by Standard Chartered Plc. Demand, sales and production, and profitability all declined, the results showed.

In addition, a drop in the new export orders sub-index suggests a broad-based weakening of demand, they wrote.