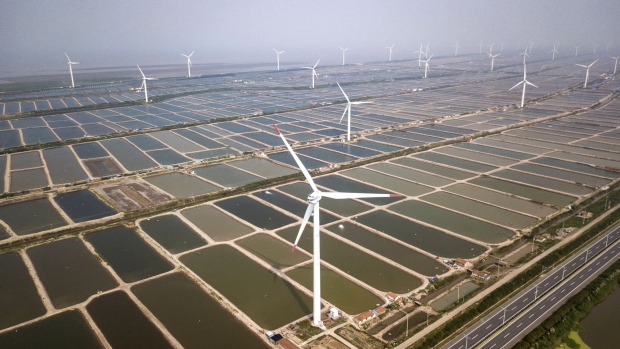 Wind turbines manufactured by Shanghai Electric Group Co. stand at a wind farm operated by China Huaneng Group in this aerial photograph taken in Qidong, China, on Thursday, June 7, 2018. China, the world's largest wind power producer, is considering setting a national target to reduce average wind curtailment rates to less than 10 percent next year and to about 5 percent by 2020, according to an April 12 government policy proposal document. Photographer: Qilai Shen/Bloomberg , Bloomberg

(Bloomberg) -- China this year will be able to absorb 52% more new wind and solar power capacity than in it added 2019.

The world’s biggest energy consumer has space on its grids to add 36.65 gigawatts of wind and 48.45 gigawatts of solar, according to a transmission analysis report by the National New Energy Absorption Monitoring and Warning Center. Grid capacity is a critical factor for new installations, as the country tries to avoid curtailing large amounts of power as it sometimes had to do during its world-leading investment binge in renewables over the past decade.

Last year, China added 25.74 gigawatts of wind and 30.11 of solar to the grid, but coal remains by far its biggest power source. The report was based on data submitted to the National Energy Administration by China’s grid operators.

The breakdown of absorption capacity by grid is:

The breakdown by province is: