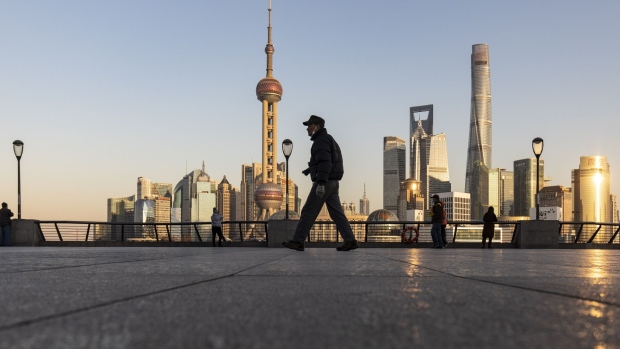 China Customs officers raise a Chinese flag during a rehearsal for a flag-raising ceremony along the Bund in front of buildings in the Lujiazui Financial District at sunrise in Shanghai, China, on Tuesday, Jan. 4, 2022. A wall of maturing debt and a surge in seasonal demand for cash will test China’s financial markets this month, putting pressure on the central bank to ensure sufficient liquidity. Photographer: Qilai Shen/Bloomberg , Bloomberg

(Bloomberg) -- A Chinese foreign exchange official said U.S. monetary tightening may cause less severe spillover effects than in the past, downplaying concerns about potential capital outflows as Beijing embarks on an easing cycle to stimulate economic growth.

China is better placed to deal with changes in the external environment due to the export-driven growth in foreign exchange deposits, more attractive yuan-denominated assets, limited pressure on onshore entities to repay foreign debt, and a more flexible Chinese currency, said Wang Chunying, spokeswoman of the State Administration of Foreign Exchange.

“The spillover effects of the U.S. Federal Reserve’s monetary tightening may be smaller than the last round of the policy,” she told reporters at a briefing Friday. The impact of potential Fed moves has been priced in by international investors to some extent as the U.S. authorities have been in close communication with the market, she added.

China’s central bank cut a key interest rate this week and pledged to use more monetary policy tools to spur the economy that’s lost momentum because of a property slump and repeated virus outbreaks. The stance is in stark contrast with other major central banks like the Fed, which is forecast to hike rates to contain inflation, and has sparked worries about downward pressure on Chinese assets such as the yuan in coming months.

Tightening cycles in the U.S. in the past often triggered outflows from China, causing the yuan to depreciate and prompting Beijing to adopt heavy-handed measures, such as making it harder for foreign companies to wire profits out of the country.

Wang tried to downplay such concerns, saying capital inflows in the past couple of years were mainly driven by strong exports rather than speculation, and domestic entities didn’t borrow as much foreign debt as before during the Fed’s quantitative easing, leaving them with smaller repayment pressure.

Foreign investors are still adding positions in onshore bonds and equities -- with net purchases rising at an average annual rate of 34% during 2018-2021 -- and the yuan is more flexible than before to better adapt to changes in the international environment, which should also help China fend off the effect of the Fed’s moves, she added.