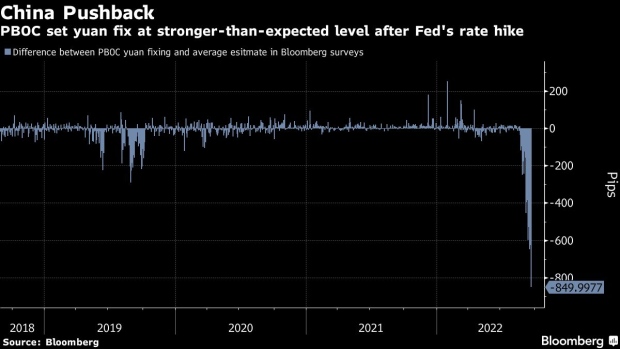 (Bloomberg) -- China’s yuan is set for its longest losing streak since June even after the central bank sought to support the currency with stronger-than-expected fixings in every single session for nearly a month.

The onshore yuan slid for the fourth straight day to trade just 0.5% shy of the weak end of its allowed trading range with the greenback following the Federal Reserve’s jumbo rate hike. The currency can trade up to 2% on either side of the fixing. The dollar-yuan’s discount to the fixing has also widened to 1,000 pips, a gap unseen since 2019. The moves suggest that Beijing’s efforts to stem the currency’s depreciation have done little to restore confidence.

“The fixing bias is not reining in the upswing of the dollar-yuan rate much and the current exchange rate regime would come under more pressure when the spot reaches the upper bound of the trading band,” said Fiona Lim, senior foreign-exchange strategist at Malayan Banking Bhd. “There are still ammunition that the PBOC can tap on to slow the yuan depreciation but the central bank is clearly trying to pace this out, especially when external forces of global growth fears and policy tightening are dominant.”

The yuan has tumbled more than 10% this year. It’s heading for the worst annual performance since 1994 as Beijing eases monetary policy to aid an economy hit by Covid curbs and tumult in the property sector. The Fed’s 75-basis-point hike on Wednesday only made it worse, as the move undermines the appeal of yuan-denominated assets and drives outflows. Chinese banks kept their main lending rates unchanged this week but forecasts are for a cut going forward.

On Thursday, the People’s Bank of China set the fixing at 6.9798 per dollar, 850 pips stronger than the average estimate in a Bloomberg survey of analysts and traders. That’s the largest ever bias on the stronger side and marks 21 straight days of stronger-than-expected fixings.

The yuan is not alone in falling against a surging dollar on Thursday. South Korea’s won weakened through the psychological level of 1,400 per greenback for the first time since 2009, while the yen edged closer to the keenly watched 145-per-dollar level. The Chinese currency fell 0.2% versus a basket of 24 trading partners’ currencies, according to a Bloomberg index.

Monetary authorities across the region are stepping up surveillance of their currencies as the dollar’s relentless gains due to Fed’s aggressive tightening batters emerging market currencies. The Bank of Japan was said to conduct a so-called rate check in the currency market last week, a move considered a precursor for intervention. South Korean authorities on Thursday vowed to take steps to stabilize the nation’s bond and currency markets.

Along with stronger-than-expected fixings, the PBOC has also reduced banks’ foreign-currency reserves to boost the yuan. Authorities have also stepped up verbal warnings against the currency’s slide. State media cited the regulator as saying last week companies shouldn’t bet on the direction and extent of currency moves.