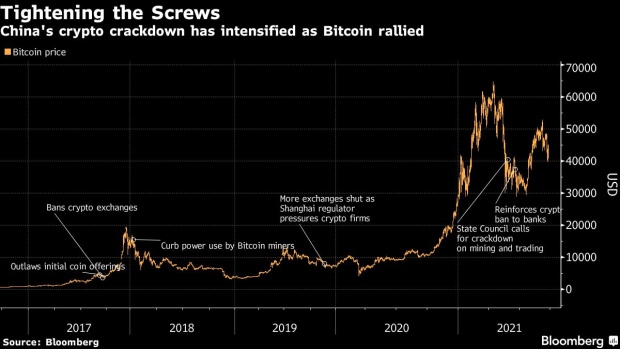 China’s multiyear crackdown on the crypto industry may have reached its apex Friday, cementing a shift in the balance of power away from one of the countries that first embraced the digital currency world.

The People’s Bank of China vowed to end illegal mining and stop offshore exchanges from conducting business with its citizens -- spurring a wipeout of as much as $159 billion in the market value of digital currencies from Bitcoin and Solana to XRP.

“This is the latest and perhaps final stage of the Chinese government’s crackdown on crypto,” said Jehan Chu, founder of investment firm Kenetic Capital in Hong Kong. “China has been consistent about its desire to rid itself of free trading in cryptocurrencies and emphasize more controlled projects.”

Once a cradle of the industry, China -- under the Communist Party’s leadership -- has since pushed crypto to the fringes with some of the harshest regulations among large economies. After chasing out local exchanges, banning crypto services by financial firms and more recently weeding out miners, the center of crypto power is now developed markets.

One telltale sign: On trading platforms Binance and FTX, volumes for popular derivatives known as perpetual futures surges on average at noon in New York, or 5 p.m. in London, according to data provider Kaiko.

It comes as countries around the world tighten the regulatory screw with the U.S. threatening industry players with lawsuits or cease-and-desist orders. But China’s stance is unequivocally hardline -- dovetailing with the Chinese Communist Party’s bid to bring key industries to heel from online gaming and tutoring to high-frequency trading.

It’s been quite the journey. In the first phase of Bitcoin’s rise since its 2009 inception, China was the base for the biggest miners and exchanges as well as a horde of active speculators. There were also signs people used digital currencies to skirt a cap on taking money out of the country, especially when the yuan was depreciating.

But the 2017 crackdown on Chinese exchanges changed all that. It prompted some like Huobi, OKEx and Binance to move their operations abroad, and by now, Chinese onshore traders’ participation in centralized exchanges is minimal.

Any remaining activity is hard to trace as it will probably be conducted via virtual private networks that obscure the user’s location, says Clara Medalie, research lead at data provider Kaiko. Some also trade on over-the-counter venues.

Still, Friday’s moves represent a further crackdown on even these alternative channels. Before China outlawed crypto exchanges in 2017, local investors held an estimated 7% of the world’s Bitcoin and made up roughly 80% of trading, according to state media.

“News out of China definitely impacts markets because it can shake market sentiment, but the actual effect of another Chinese ban has minimal impact on underlying market structure at this point,” said Medalie.

At the same time, the country has remained supportive of the blockchain technology that underlies Bitcoin, as well as -- naturally -- its own digital yuan, which has been enthusiastically promoted by the People’s Bank of China.

“China might still be setting the scene for its own central bank digital currency, and therefore wants to clear the plate for what will be a centrally controlled but blockchain-denominated coin,” Justin d’Anethan, Hong Kong-based sales manager at crypto exchange EQUOS, wrote in a message. “Or maybe it’s simply trying to actively fight capital flowing out in a period of need.”

At Bequant, a crypto prime brokerage, head of research Martha Reyes says the Friday selloff was probably exacerbated by widespread caution after a Sept. 7 plunge as well as options expiring Friday. Funding rates, or the interest paid by bulls to trade futures, have been falling recently, and $2.9 billion of outstanding options were set to expire Friday, according to the Deribit exchange. It’s an event that some say has typically fueled volatility.

An index of Bitcoin volatility jumped from 80 to as high as 91 over the course of Friday, Deribit data show.

Even as the influence of Chinese traders’ wanes, the country’s bid to avert a property debt crisis has demonstrated immense sway on both global stock and crypto markets this week. The 50-day correlation between the S&P 500 and Bitcoin has been consistently positive this year, jumping to the highest since October recently.