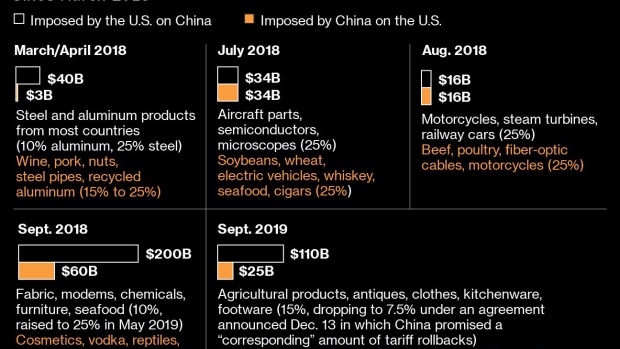 Boxes in the lot at a Christmas ornament factory in Yiwu, China, on Tuesday, Oct. 19, 2021. Since mid-October, Yiwu has also been affected by China's ongoing electricity crunch, which has forced manufacturers to hunt for generators, or suspend production altogether. Photographer: Qilai Shen/Bloomberg , Bloomberg

(Bloomberg) -- Twenty years after China’s ascent into the World Trade Organization, governments around the world are grappling with how to handle the exporting juggernaut for the next two decades.

While it’s largely agreed even by those who brought China into the global trading tent that its entry hasn’t played out as expected, there’s little consensus on what to do about it.

Former President Donald Trump’s punitive tariffs failed to narrow the U.S.-China trade imbalance as Chinese exports surged during the pandemic. Meanwhile, a “coalition of the willing” ready to call out China for alleged unfair practices has yet to solidify.

“The position we are in now is very uncertain,” said Charlene Barshefsky, who was former President Bill Clinton’s top trade official and one of the architects of China’s WTO entry. “It’s one marked by inconsistency, by varying degrees of failure and an absence of common purpose.”

For China, the benefits of a rules-based international order are clear. Over the past 20 years it grew from the sixth to the second largest economy as GDP increased 11-fold to almost $15 trillion, while foreign direct investment increased four-fold.

For wealthy nations it’s a mixed picture. Exporters benefited from the deep concessions China made to join the WTO but increased competition from cheap Chinese goods brought pain to foreign workers -- particularly in regions with labor-intensive manufacturing like electronics, apparel, tires, steel and aluminum.

“We were losing jobs here in North Carolina,” said Joel Smith, a second generation furniture seller in Fayetteville, North Carolina. “If you only have to pay people a dollar an hour and healthcare is a Band-Aid and an Aspirin you can put a lot of people out of business.”

That downside is evident in the research of economists such as David Autor, David Dorn and Gordon Hanson, early analysts of what they called the “China Shock.” Their latest paper revealed that U.S. job losses due to China’s economic might  -- which they previously estimated were in excess of 2.5 million -- continued to reverberate in American communities well into 2019.

Such analysis explains why China has become so toxic in Washington, with lawmakers on both sides of the aisle lining up to label its accession to the WTO as a job-killing mistake.

Despite a more positive change in tone toward the WTO, President Joe Biden has largely continued his predecessor’s hard-line approach. Biden is actively crippling the WTO’s appellate body and continues to impose Trump’s unauthorized tariffs on $300 billion worth of Chinese exports.

“For too long, China’s lack of adherence to global trading norms has undercut the prosperity of Americans and others around the world,” U.S. Trade Representative Katherine Tai said in a recent speech.

In October, the U.S. accused its closest economic rival of failing to play by the rules of international trade. Australia’s Ambassador to the WTO, George Mina, warned of Chinese economic coercion and said Beijing’s trade behaviors are increasingly motivated by “political considerations.”

The list of grievances includes criticism that the Chinese government subsidizes domestic companies at the cost of foreign competition; that it plays an over-sized role in managing state enterprises; that access to China’s market remains difficult for foreign entrants; and intellectual property theft remains widespread.

China rebuffs such charges, saying it welcomes foreign investment and has strengthened laws to protect IP, among other measures.

“If you check the timeline, you will see that we have completely fulfilled our obligations and commitments,” said Chinese Vice Commerce Minister Wang Shouwen following the WTO’s latest review of Chinese trade practices.

Despite the trade gripes, international firms are expanding their businesses in China. Some 97% of companies said they intend to keep investing in China, mainly due to the country’s sizable market, continued growth and well-developed supply chains, according to a recent HSBC Holdings Plc. survey.

While C-Suite executives remain fixated on business opportunities in the middle kingdom, Western governments are searching for new tools and strategies to counter China’s economic might. For many, their conclusion is that the WTO isn’t fit for the job.

“The largest problems — such as complaints about subsidies and other advantages for Chinese state-owned enterprises — stem in part from the lack of WTO rules about such problems,” said Robert Zoellick, who as the U.S. Trade Representative in 2001 helped complete China’s WTO entry.

WTO rules “failed to serve as a platform for members of different models to cooperate and compete with each other,” said Zhang, who claims to have memorized the WTO’s 34,000-word rulebook. “China and other WTO members need to adapt to each other.”

The Biden administration’s plan is to work with America’s allies to present a coordinated approach to China. This year, the U.S. and EU patched up their biggest trade fights from the Trump era and the U.S. is now pushing plans for a new economic framework for the Indo-Pacific region.

The U.S. also revived a dormant effort to align the EU and Japan around a set of high bar rules to govern industrial subsidies, state owned enterprises, and other trade distorting practices.

If successful, the initiative could represent the greatest reform to the global trading system since the WTO was established. But getting China to join the talks, which are ostensibly aimed at restricting Beijing’s state-led economic model, remains a major hurdle.

One thing is clear: Western governments today are far more cautious about the competitive threat posed by China than they were a generation ago.

“People can say we should have thought better about what China would be like 20 years from now,” said Pascal Lamy, Europe’s top trade official back in 2001. “I accept this criticism. We were probably a bit short-sighted.”