China’s economic slowdown deepened in July due to a worsening property slump and continued coronavirus lockdowns, with an unexpected cut in interest rates unlikely to turn things around while those twin drags remain.

Retail sales, industrial output and investment all slowed and missed economists estimates in July. The surveyed jobless rate for those aged 16-24 climbed to 19.9 per cent, a record high and headache for the Communist Party as it gears up for a major congress in coming months that’s expected to give President Xi Jinping a precedent-defying third term in power. 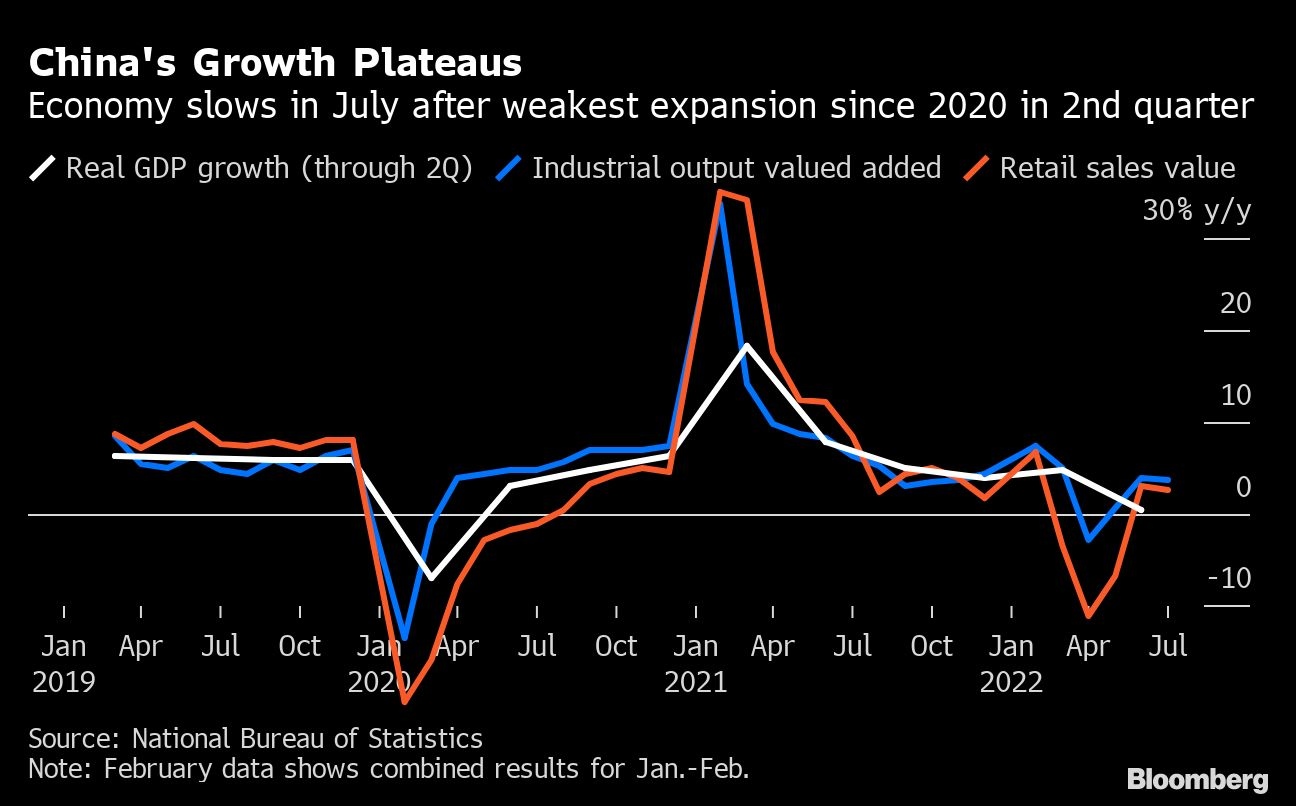 The data suggest a crisis of confidence among Chinese businesses and households, adding another threat to the world economy as global demand for everything from Apple iPhones to luxury goods take a knock. At the same time, a worsening property slump is being felt at home and abroad as commodity prices such as iron ore and copper plummet.

China’s bonds surged and the offshore yuan weakened as investors absorbed the disappointing data prints and surprise rate cut. A stock rally cooled across Asia, commodities tumbled and the dollar rose as the gloomy news spread across financial markets.

China’s leadership has ruled out large-scale stimulus and vowed to continue with its stringent COVID Zero policy, requiring authorities to shut down businesses and lock down the population when major outbreaks occur -- as is the case now in the resort island of Hainan. That’s dimming the growth outlook for the rest of the year, which economists are downgrading further below 4 per cent.

China’s central bank cut both one-year and seven-day lending rates by 10 basis points, a move economists said would have little impact since Covid controls have made households and businesses reluctant to borrow. New credit in July increased at the slowest pace since at least 2017.

“The rate cut shows the entire economy is in trouble,” said Iris Pang of ING Groep NV. A wave of mortgage boycotts by households over incomplete projects has made households nervous about buying homes, reducing the impact of lower mortgage rates, she added. 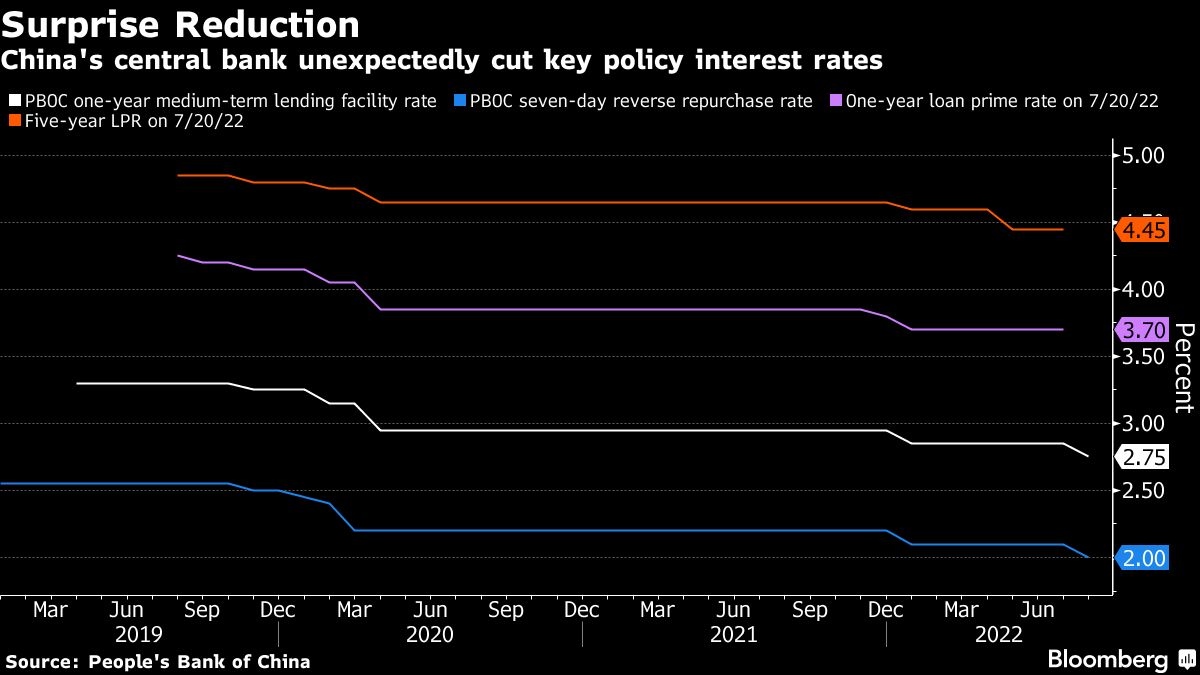 The economy’s slowdown -- which began in March as authorities in dozens of cities imposed lockdowns to control Covid outbreaks -- has spilled over to major economies such as Germany and South Korea as China’s demand for manufactured goods slumps.

Nomura Holdings Inc. said growth in the second half will be significantly hindered by the Covid Zero policy, the downward spiral of the property market, and a likely slowdown in exports as the global economy weakens.

“Beijing’s policy support could be too little, too late and too inefficient,” the economists led by Lu Ting wrote in a note. “We think markets are too optimistic about growth in the second half, and we expect a new round of cuts of growth forecasts in coming weeks.”

Xi and the Communist Party’s top leaders gave a downbeat assessment of economic growth but didn’t announce new stimulus policies at a key policy meeting in July. The leadership has privately acknowledged the country’s annual growth target of about 5.5% is not achievable.

Chen Long, an economist at Beijing-based consultancy Plenum, said Chinese authorities are trying to do something they haven’t managed in more than two decades: revive the economy without relying on a property boom.

“Beijing has to ease a lot more if they’re serious about driving a new credit cycle,” he said.

So far, policy makers have refrained from a large-scale bailout for property developers and repeated hawkish language against speculation in the sector. Liu Peiqian, chief China economist at NatWest Group Plc, said “more substantial easing on the property sector” and a relaxing Covid policies were needed to improve sentiment.

Xi and other top officials are expected to be gathering at a beachside resort near Beijing for an annual retreat, making any near-term announcement of stimulus policies unlikely. Discussions are likely to be dominated by personnel changes at the upcoming Communist Party congress.

“The sharp downside surprise in China’s July activity shows the economy lost momentum after only a brief reopening-driven rebound in June.”

“The most surprising development was a slowdown in investment -- suggesting a heavier-than-expected drag from the property market turmoil. Coming after extremely weak credit for July, the figures support the People’s Bank of China’s decision to cut rates -- and we don’t think the central bank is done yet.”

Beijing’s attempts to boost the economy has centered on encouraging local governments to borrow to fund infrastructure. Those efforts saw some success in July, but the scale of investment wasn’t enough to compensate for the sharp decline in housing investment.

The housing slump worsened in July, with sales falling more than 28% on-year and prices declining for an 11th consecutive month. That is rippling through China’s industrial sector, with monthly steel production in July reaching the lowest since 2018.

One bright spot in the data was strong growth in car production and sales after cuts to purchase taxes. China’s exports were also strong in July, defying expectations of a slowdown.

There were several data points though that had implications for China’s long-term growth, including high youth unemployment. Foreign companies, which are taking a bigger hit to profits than their Chinese peers, reduced investment on new projects by more than 4% in the first seven months of the year compared with a year earlier.

Chinese local governments have issued most of the bonds they were allocated to use for infrastructure spending, leading some economists to warn of a “policy cliff” before the end of the year unless more borrowing is announced. Even though Beijing has hinted that additional bonds could be approved, it hasn’t provided any specifics yet.

“The path of economic recovery in the second half will be bumpy and uncertain, depending on Covid and related policies, developments in the property market, and strength of external growth,” UBS AG economists led by Wang Tao wrote in a note. “Given the subdued July growth, our current below-consensus growth forecast faces some downside risks.”