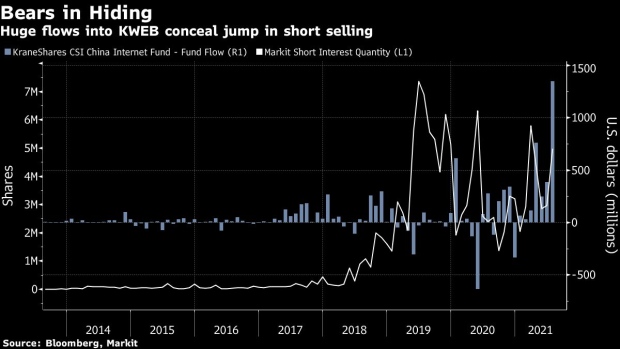 (Bloomberg) -- The furious rebound of Chinese technology stocks will be painful news for investors who rushed to a $4.6 billion exchange-traded fund to bet against the beleaguered sector.

As Beijing intensified its crackdown on private firms, plenty of traders made wagers on continuing turmoil, especially via the KraneShares CSI China Internet Fund (ticker KWEB).

Through most of July the ETF lured inflows, amounting to a record $1.3 billion in the month, likely fueled by dip buying after the fund slumped as much as 54% from a February high.

However, a good chunk of the inflows appears to have funded new ETF shares that were immediately lent out to short sellers, a veiled process known as “create-to-lend.”

As few as 1.9 million shares in the fund were out on loan early in July, a figure that surged to 6.1 million this week, according to IHS Markit Ltd. data. While valuing that increase is tough because of the ETF’s rapid price moves, the extra 4.2 million shares sold short would be worth about $235 million at the median share price of the past few weeks.

Options activity could also be behind some of the flows, with open interest at a record in both bullish calls and bearish puts, according to data compiled by Bloomberg. When options traders such as market makers need to hedge their exposure, they often buy or sell the underlying ETF shares.

“It’s pretty likely there are more regulatory assaults to come and markets will be looking out for red warning flags,” said Nigel Green, chief executive and founder of deVere Group. “This means continuing volatility as investors repeatedly move in to buy the dips then sell-off.”