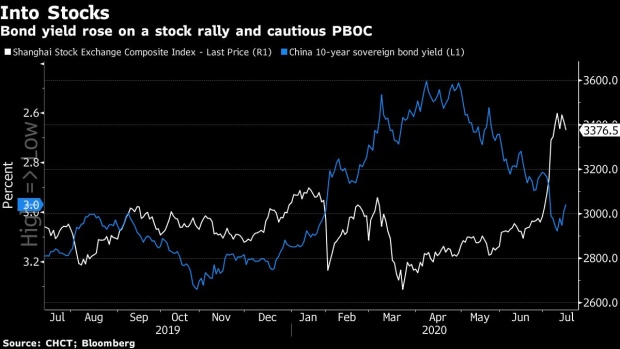 China’s policy makers have sent another warning to property and stock investors in an attempt to prevent the formation of asset bubbles that could dilute their efforts to fund the economic recovery.

The municipal government of Shenzhen, the tech hub where home prices have seen the biggest surge in two years in recent months, tightened the rules on property transactions on Wednesday. That came after a cautious liquidity operation by the People’s Bank of China, in which some central bank funding was withdrawn from the banking system for the month.

The moves signal a careful balance being enacted by Chinese authorities as they try to keep a steady credit supply to businesses struggling to recover from the post-Covid slump, while avoiding a repeat of asset bubbles seen in previous rounds of stimulus. In light of recovering domestic and external demand, PBOC officials have already hinted they intend to eventually remove the special tools deployed to stimulate the economy during the virus outbreak.

“While the bull market advances, there is also concern on whether we will see a repeat of the 2015 boom and bust roller-coast cycle,” Citigroup Inc. economists led by Liu Li-gang wrote in a note. Some of the funds offered to help with economic recovery may end up “diverted away from the real economy,” he warned.

The $1.5 trillion rally in Chinese stocks this month is so significant that it makes up about a third of the value added to the world’s equities. China’s major stock benchmarks are all overbought -- a technical indicator that measures the pace of gains or losses -- the first time that has happened since 2015. The ChiNext Index of technology shares is now up 60% for the year, with a rally that’s been so fast it sent a gauge of momentum to all-time high.

The PBOC offered 400 billion yuan ($57 billion) of medium-term loans to banks on Wednesday, leaving some of the 697.7 billion yuan of the loans due this month to expire. The central bank’s stance in such liquidity operations can be interpreted as a guide to how officials see the overall market.

Last week a pair of government-owned funds announced plans to trim holdings of stocks that had soared as state-run media warned of a “crazy” bull market.

Across China, signs are also emerging that rising credit supply to the economy has in part led to a jump in upmarket housing prices. Wealthy buyers are snapping up luxury apartments, in many cases to guard their wealth against anticipated inflation in the sector. Homes priced at about 20 million yuan ($2.8 million) in the country’s biggest cities have emerged as among the most popular since April, when authorities started to ease credit to help revive the economy, according to China Real Estate Information Corp.

The stock of aggregate financing, the widest gauge of credit supply in China, rose by 12.8% by June, the fastest pace in more than two years. PBOC officials said at a press conference last week that the growth of bank loans will be “steady” in the second half, which some economists say signals a slower pace of expansion.