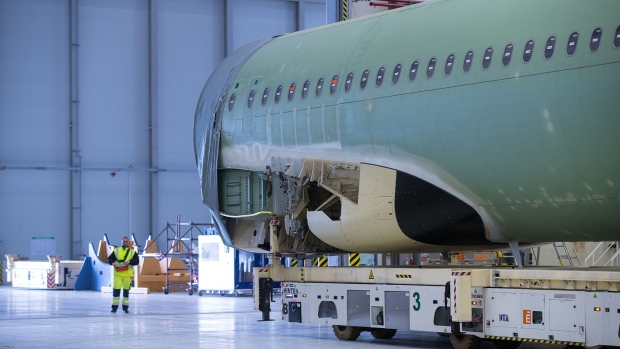 The assembled fuselage of an Airbus A320 narrow-body passenger twin-engine jet airliner moves across the Airbus SE factory floor in Hamburg, Germany, on Tuesday, Feb. 27, 2018. Airbus's plan to further lift production of its A320neo jet faces resistance from both engine suppliers after Safran SA joined Pratt & Whitney in suggesting the move would strain resources to the limit. , Bloomberg

(Bloomberg) -- China Southern Airlines Co. has signed an agreement with Airbus SE to purchase 96 of the European planemaker’s A320neo series of jets for about $12.2 billion, according to an exchange filing Friday.

The move is a blow for rival Boeing Co., historically the Chinese carrier’s biggest customer in Asia’s largest economy. China Southern in May removed more than 100 of the US manufacturer’s 737 Max jets from its near-term fleet plans, citing uncertainty over deliveries.

That tack was a sharp reversal for China Southern, which had outlined plans to rapidly expand its 737 Max fleet, saying in its annual report in March that 39 were due to arrive this year, building toward a total of 103 deliveries through 2024.

None of China’s state-owned carriers have said if or when they might resume taking the Max once it is officially back in service. China was the first to ground the Max in March 2019 following fatal crashes in Indonesia and Ethiopia that combined killed 346 people.

China is key for Airbus and Boeing and both have worked toward establishing a presence in the world’s most-populous nation. While the market remains largely close due to Covid-related restrictions, aircraft orders are made years ahead of actual deliveries given limited manufacturing capacity of planemakers.

In selling narrowbody jets, Airbus has surged ahead of Boeing in recent times. Boeing has also struggled with delayed deliveries of bigger models like its 787 Dreamliner jets.

Airbus has faced issues with deliveries too, with Chief Executive Officer Guillaume Faury saying last month it can’t deliver fully built jets by the end of May due to supply chain issues.

Fast-growing Indian budget carrier IndiGo, operated by InterGlobe Aviation Ltd., is the world’s largest customer for A320neos, having ordered 730 of those jets.

At the end of 2021, China Southern -- the country’s largest airline -- had a fleet of 399 Boeing narrowbodies, according to its latest annual report. It also had 334 Airbus SEA320 series narrowbodies at the end of last year.