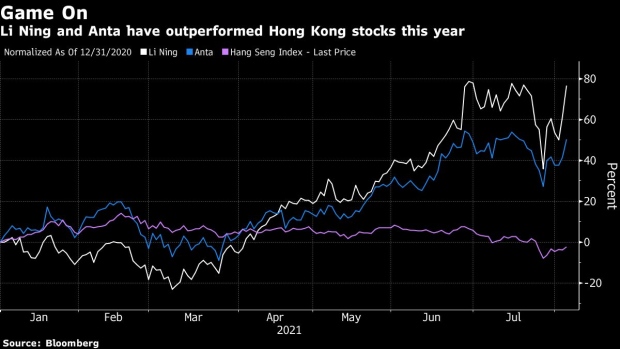 BEIJING, CHINA - APRIL 16: Tourists and shoppers walk by a Li-Ning store, a Chinese sportswear brand, on April 16, 2021 at a shopping district in Beijing, China. China announced robust economic growth of 18.3 percent in the first quarter of 2021, compared to the same period last year when the world's second largest economy ground to a halt due to the COVID-19 pandemic. (Photo by Kevin Frayer/Getty Images) , Photographer: Kevin Frayer/Getty Images AsiaPac

(Bloomberg) -- Shares of Chinese sneaker makers and other sports-related companies climbed as the government launched an effort to promote exercise amid harsh critiques of the videogame industry in state media.

Li Ning Co. surged as much as 12% while Anta Sports Products Ltd. advanced 10%, with both Hong Kong-listed sportswear makers pushing toward fresh highs. The gains followed the announcement of plans by the State Council to renovate parks, gyms and stadiums in its effort to build a 5 trillion yuan ($774 billion) sports industry by 2025.

One of the main targets of the plan is to encourage participation in sports by young people. The plan stands in stark contrast to Tuesday’s media attack on the “spiritual opium” of games, which sent shares of Tencent Holdings Ltd. and other related names tumbling.

Sportswear has been a safe haven as Beijing’s crackdowns on fintech, real estate and overseas listings have rippled through the market. Li Ning is up 76% this year, while Anta has climbed 49%, compared with a 2.5% loss in the Hang Seng Index. The sports sector has benefited from a wave of nationalism in response to Xinjiang cotton controversy plus excitement over the return of the Olympics and other sporting events.

Nike Shares Lose Out to China Rivals After Xinjiang Accusations

“We believe with increasingly sophisticated facilities and guidelines to call for sports participation, China is well positioned to grow its sports industry,” Goldman Sachs analysts led by Michelle Cheng wrote in a note. Goldman maintains buy on Li Ning and Anta, saying both should benefit from industry growth and the “China-chic trend”.

Among other stocks getting a boost Wednesday, retailer Topsports International Holdings Ltd. soared as much as 23% in Hong Kong. On the mainland, Lander Sports Development Co., China Sports Industry Group Co. and Jiangsu Jinling Sports Equipment Co. all jumped by their daily limits.