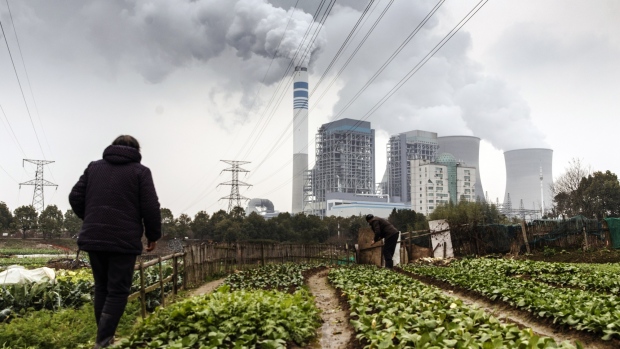 People tend to vegetables growing in a field as emission rises from cooling towers at a coal-fired power station in Tongling, Anhui province, China, on Wednesday, Jan. 16, 2019. China's economy expanded at its weakest pace since 2009, according to figures Monday, with gross domestic product rising 6.4 percent in the fourth quarter from a year earlier. , Bloomberg

(Bloomberg) -- One of China’s largest state investment companies vowed to stop plowing money into new coal-fired plants, joining a global shift by financiers away from the polluting fossil fuel.

Although State Development & Investment Corp.’s withdrawal is in line with the country’s ambition to use less coal and more cleaner fuels, it doesn’t mark a broader shift from the cheap and plentiful energy source that will provide the bulk of China’s power for years to come.

In its battle against smog-filled skies, the world’s biggest coal consumer is seeking to bolster use of natural gas and is spending more on renewable energy than any other country. But it’s still pumping money at home and abroad into coal-fired generation, which will grow by 21 percent before peaking in 2030, BloombergNEF said in its New Energy Outlook 2018.

“China will continue to be a main coal consumer and investor in the coming decade” and it isn’t retreating from the fuel, said Tian Miao, a Beijing-based analyst at Everbright Sun Hung Kai Co.

SDIC will no longer invest in new thermal power business, a Beijing-based spokesman said Wednesday. He declined to comment on SDIC’s plans for its existing thermal power assets, including coal-burning plants held by listed unit SDIC Power Holdings Co. The company sold all its coal mining assets to China National Coal Group in 2016.

Large investors and lenders are moving away from coal in growing numbers as public pressure to meet global climate targets gets stronger, particularly in developed economies.

Banks including Standard Chartered Plc, HSBC Holdings Plc and Societe Generale SA have made pledges to stop providing capital for coal plants while Japanese lenders, among the biggest funders of coal projects, have also begun a shift to more climate-friendly policies.

Consumption growth is now seen flat in the coming decades as most of the world’s major economies promote cleaner fuels. But coal still remains a cheap and abundant source of supply and demand is growing in developing countries, notably in Asia. While the International Energy Agency sees a 0.5 percent annual decline in China’s consumption through 2023, it will still account for nearly half the world’s demand.

“The country will remain an important buyer in the seaborne coal market, and any annual fluctuations in its domestic demand could impact global prices,” Xizhou Zhou, an analyst at IHS Markit, said by email. “Chinese banks will also continue to finance coal-fired power, even though it may be at a smaller scale.”

Still, SDIC’s exit is “globally significant’’ because it’s the first Chinese domestic financier to announce a total withdrawal, according to the privately funded Institute for Energy Economics and Financial Analysis.

Coal doesn’t fit well with SDIC’s investment portfolio, its spokesman said. The fund currently gets about 55 percent of revenue from the financial sector, and all future energy investment will be in clean energy, he added.

SDIC’s coal exit was earlier reported by the Australian Financial Review. The paper cited Chinese media reports that SDIC Chairman Wang Huisheng had said the company had already reached its goal of withdrawing from the sector by 2021.

--With assistance from Miao Han and Stephen Stapczynski.

To contact the editors responsible for this story: Ramsey Al-Rikabi at ralrikabi@bloomberg.net, Jason Rogers, Jasmine Ng