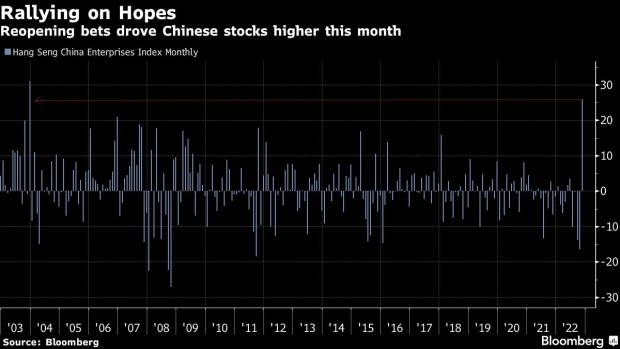 (Bloomberg) -- Chinese stocks rallied again on Wednesday as the lifting of lockdown restrictions in parts of some districts added fuel to reopening bets that have driven this month’s historic rally.

The Hang Seng China Enterprises Index jumped 2.2% to take November’s gain to 29%, its best for any month since late 2003. The benchmark Hang Seng Index surged almost 27%, the most since 1998. Stocks that benefit from a reopening jumped, including airlines, casinos and restaurant operators.

Sentiment toward the nation’s assets has markedly improved this month as Beijing loosened some of its hardline virus approach and lent more support to the property sector. The shift has spurred hopes that China is laying the grounds for an eventual Covid Zero exit, prompting traders to place bets even as a spike in infections and nationwide protests suggest the path to reopening will be rocky.

Guangzhou still has a high number of Covid cases, and the move to go ahead with “further optimization of curbs is a signal that the city is ready for more relaxation,” said Li Changmin, managing director at Snowball Wealth. “More cities may follow suit. This will undoubtedly drive a revaluation in sectors worst hit.”

US-listed Chinese stocks are also headed for their best month ever, with the Nasdaq Golden Dragon Index up 30% this month, a dramatic turnaround from October’s 25% plunge. The CSI 300 Index of mainland shares gained nearly 10% in November.

While the timeline of reopening remains highly uncertain, authorities have been taking incremental but clear steps toward winding down Covid restrictions. On Tuesday, markets rallied as the top health body said it will bolster vaccinations among senior citizens, while warning against any excessive control measures.

The rhetoric also seems to be moving in a more nuanced direction, with local governments vowing to prioritize the public over Covid control, and the People’s Daily urging citizens to take responsibility for their own health.

Nationwide protests against Covid curbs, which had raised market jitters earlier this week, appear to have subsided for now amid heavy police presence, authorities’ vow to crack down on “hostile forces”, and also moves to soothe public anger.

“I think the direction of reopening is quite clear,” said Vey-Sern Ling, managing director at Union Bancaire Privee. “Government is taking baby steps which is to be expected. It is also doing the right things, such as encouraging vaccination for the elderly.”

--With assistance from John Cheng.