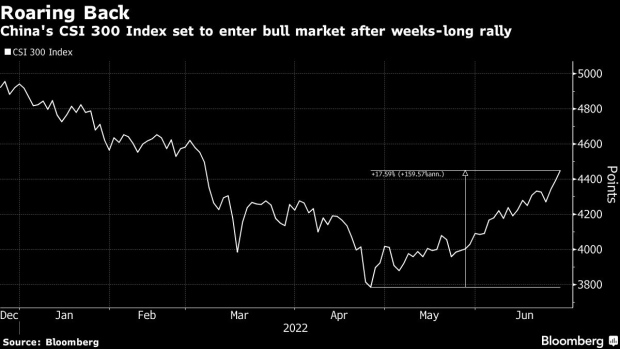 The recent rebound in Chinese equities, which started in April while stocks elsewhere were still selling off, is gaining momentum thanks to an improving economic outlook as well as persistent monetary and fiscal stimulus. President Xi Jinping’s planned visit to Hong Kong is boosting stocks that would benefit from easing pandemic restrictions such as Macau casinos.

The benchmark CSI 300 Index gained 1.1%, adding 4% in three sessions, led by consumer shares, as Shanghai’s leader declared victory in defending the financial hub against Covid and will this week allow residents to dine in restaurants in some areas deemed lower risk.

Adding to a growing number of market participants turning more positive on Chinese shares, abrdn plc’s regional chairman Hugh Young said they look to be the best home for fresh money in Asia amid a tough investment environment.

“We are inclined to put more money into China again, depends on the portfolio,” Young said in an interview on Monday, adding that the firm underweights the country’s shares in portfolios. “It’s very hard to be super bullish about anything at the moment” but valuations in China are reasonable and the investing landscape could improve.

Redmond Wong, a market strategist at Saxo Capital Markets, said there was “a fear-of-missing-out sentiment out there.”

Hong Kong’s Hang Seng Tech Index, which tracks Chinese tech stocks listed in the city, jumped nearly 5%, making for a gain of 11% in three days and now up 46% from their March 15 low. BYD Electronic International Co. and Xiaomi Corp., both added at least 12%. Alibaba Group Holding Ltd. advanced more than 4%.

Overseas investors purchased 7.3 billion yuan ($1.1 billion) of onshore stocks via the Hong Kong trading link Monday for a third straight session of inflows, while turnover in Chinese equities topped the 1 trillion yuan mark for the 14th session this month. Quarter-end rebalancing may also have played a role in the recent buying into Chinese stocks.

“When we think about valuation and we think about where the direction of the economy goes next in an area like China, that is one of the areas where from a longer term perspective we see some opportunities,” Meera Pandit, JPMorgan Asset Management Vice President and Global Market Strategist said on Bloomberg Radio.