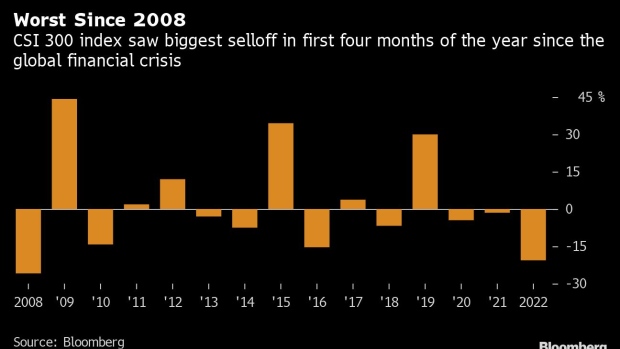 About 2,350 stock-related hedge funds last month dropped below a threshold that typically activates clauses requiring them to slash exposures, with many headed toward a level that mandates liquidation, according to an industry data provider. Such signs of stress were “close to the historical high,” China Merchants Securities Co. analysts said in a report this month.

Unusual elsewhere, the selling rules are common in China, where they were introduced to protect hedge fund investors from outsized losses. They can, however, backfire in a falling market when many funds are forced to pare their stock holdings. In a sign regulators are taking notice, stock exchanges have been asking some funds to assess the pressure on their portfolios ​since March, according to people with knowledge of the matter, who asked not to be named as the discussions are private.

“The pressure on the market can be fairly big following the industry’s rapid expansion last year, especially if the quant funds’ reductions are concentrated,” given similarities in their trading strategies, said Yan Hong, director of the China Hedge Fund Research Center at the Shanghai Advanced Institute of Finance. While not normally a problem, these measures are “forcing many hedge funds to sell” in this year’s “highly volatile market,” he said.

Despite brief periods of respite, China’s benchmark CSI 300 Index had its worst January to April period since 2008. It has fallen about 19% so far this year, as a stringent Covid Zero policy and crackdowns on private enterprise combined to sap investor confidence. A slew of disappointing economic data from China this month also highlighted the growing toll of a lockdown-dependent approach, raising concerns that markets will remain under pressure unless China shifts its approach.

For a hedge fund industry that surged 66% last year to end up with 6.1 trillion yuan ($903 billion) of assets under management, it’s been a sharp reversal of fortunes. The sector was managing 6.35 trillion yuan as of March 31.

Every strategy booked losses in the first quarter except for funds focused on commodities. The requirement to sell when certain triggers are hit have lumped pressure on struggling funds, leaving little room for recovery.

As of April 22, almost 10% of over 24,500 stock-related hedge funds tracked by Shenzhen PaiPaiWang Investment & Management Co. had fallen below 0.8 yuan in net value per unit, a typical warning line that often requires a fund to cut its stock position below 50%.

They remained above 0.7 yuan, a so-called stop-loss line that mandates liquidation. About 7% of the funds tracked have breached that threshold. More than 1,000 funds have already been liquidated prematurely this year, according to the Merchants Securities report.

Data from consultancy Geshang Wealth had more than a quarter of the 1,153 long-only funds it tracks below 0.8 yuan as of May 5, a jump from 16% in mid-March.

The terms, agreed on between the funds and their investors, can vary.

Forced selling at market lows like this not only fuels stock declines, but prevents managers from adding positions to capture any potential rebound, said Xie Shiqi, an analyst at Beijing Jinzhang Investment Management Ltd., a hedge fund affiliated with Geshang Wealth.

The market declines have hit both large and small firms.

If weaker fund management could have contributed to the smallest firms’ drawdowns, the top-tier’s rapid new product launches since last year could be behind why they’re facing “currently relatively large liquidation risks,” the Merchants Securities’ analysts, led by Ren Tong, wrote in the report.

This includes Beijing-based quantitative fund Lingjun Investment, which was one of the most active fund raisers last year and managed more than 70 billion yuan as of March. Some of its funds fell below the 0.85 yuan warning line the company uses last month, and Lingjun said it will strictly follow requirements in its contracts to adjust investments, Chinafund.com reported. A Lingjun spokesperson told Bloomberg News that the company will try its best to optimize its model and called on clients to adhere to long-term value investment.

While hedge funds in western markets employ stop-loss levels to manage risk, the stringent industrywide approach adopted in China is unique. The practice was introduced by trust firms that first distributed private securities funds, or the Chinese equivalent of hedge funds, to protect clients, according to consultancy Howbuy Wealth Management Co.

Even though the drawbacks of the approach are becoming more apparent, scrapping or lowering the triggers is “a huge challenge” as it requires negotiations with all investors, Yan of the China Hedge Fund Research Center said. Regulators will likely focus on ensuring contract fairness and preventing systemic risks, he said.

With the present volatility, officials at the country’s stock exchanges have reached out to the funds to assess the stresses they are facing as well as discuss their take on this practice, though it’s unclear if any action will be taken, people familiar with the talks said. The Shanghai and Shenzhen stock exchanges didn’t immediately respond to requests for comment.

While some funds have been seeking to lower the trigger points, amending the contracts is tricky. “Revising the contracts after having fallen through the warning and stop-loss lines can indeed damage investor confidence,” Xie said. “Managers should do their stress and liquidity tests well, and manage positions in advance.”