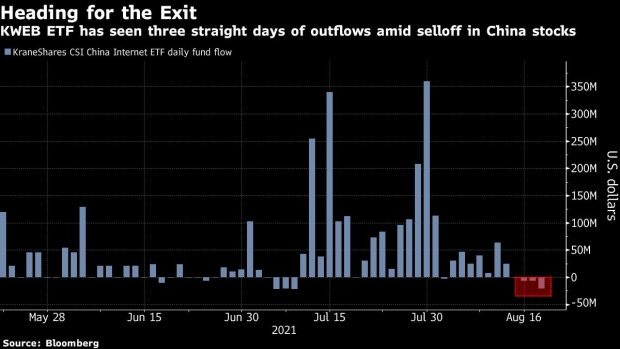 (Bloomberg) -- Chinese stocks listed in the U.S. endured another day of selling after policymakers in China unleashed a fresh round of proposed regulations.

American depositary receipts for technology giants including Tencent Holdings Ltd. and Alibaba Group Holding Ltd. both tumbled more than 4.8% each on Thursday. This comes after a painful day of trading for Chinese tech firms listed in Asia, which saw the Hang Seng Tech Index briefly fall to the lowest level since its inception in July 2020 and Alibaba sink to a record low in Hong Kong.

With the rout continuing to deepen, investors have begun pulling money from some U.S. exchange-traded funds that focus on Chinese stocks. The $4.9 billion KraneShares CSI China Internet ETF has seen three consecutive days of outflows to begin the week, putting it on pace to snap a five-week streak of inflows, according to data compiled by Bloomberg.

The fund, which invests primarily in American depositary receipts and Hong Kong-listed shares of Chinese companies, has plunged more than 42% this year, making it the worst performing non-leveraged U.S.-listed equity ETF.

Thursday’s slump comes after China said it is studying proposals to further ensure the rights of drivers who work for online companies and to step up oversight of the live streaming industry. Didi Global Inc. dropped as much as 5.8%, extending its decline for a second day.

“The China regulatory campaign isn’t showing any signs of abating, and this remains a huge drag not only on that country’s tech stocks, but increasingly other markets as well,” said Vital Knowledge founder Adam Crisafulli.

Investor sentiment has been crushed in recent weeks as Beijing’s sweeping list of crackdowns has grown to target everything from big-tech firms, to private education companies and gaming addiction. During it’s earnings call on Wednesday, Tencent President Martin Lau told analysts that he expects more regulations will be coming in the near future.

The unrelenting selloff has spurred some of the world’s most well-known investors to rethink their investments in the nation’s shares. Funds including Cathie Wood’s flagship Ark Innovation ETF, Soros Fund Management, D1 Capital Partners and Soroban Capital Partners have all exited some or all of their holdings of U.S.-listed China shares.

In the span of just six months the Nasdaq Golden Dragon China Index -- which tracks 98 firms listed in the U.S. that conduct a majority of their business in China -- has plunged about 51%. While the gauge managed to stage a slight rally on Wednesday, gaining 1.4%, its members have still combined to shed nearly $920 billion in value since the benchmark hit a record high in February.

(Updates to include details on ETF outflows, pricing throughout.)