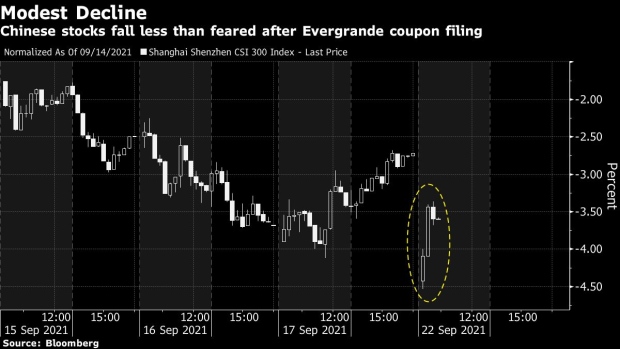 A resident walks past a lamp post by the side of a road at China Evergrande Group's Life in Venice real estate and tourism development in Qidong, Jiangsu province, China, on Tuesday, Sept. 21, 2021. Evergrande slid deeper in equity and credit markets Tuesday, fueling concerns about broader contagion after S&P Global Ratings said the developer is on the brink of default. , Bloomberg

(Bloomberg) -- Chinese shares fell less than feared Wednesday as trading resumed after a two-day holiday, with investors finally able to price in the impact of China Evergrande Group’s debt crisis.

The CSI 300 Index fell as much as 1.9% with financial and consumer discretionary stocks leading declines, before quickly paring losses. Investor sentiment was buoyed by reports a China Evergrande Group unit had negotiated a coupon payment with bondholders.

Evergrande’s onshore property unit will make an interest payment for a bond maturing in 2025 on Thursday, according to an exchange filing.

The news on the repayment “will be helpful and hopefully suppress some of the inevitable volatility and downside after the holiday break,” said Gary Dugan, chief executive officer at the Global CIO Office. “For confidence to return more meaningfully, it will need the market to see sight of the broad restructuring plans for Evergrande.”

The benchmark had posted a 3.1% decline last week on concern about the financial position of the world’s largest developer and amid disappointing economic data for August.

Global investors sold off risk assets this week amid concerns about the Chinese developer and a crackdown on the country’s real-estate sector. Some $6.7 billion was wiped off the value of Hong Kong’s four top property giants on Monday amid a global selloff that ensnared even stocks with less tangible links to China.

Investors are closely watching how Beijing plans to deal with the situation surrounding Asia’s biggest high-yield bond issuer. The People’s Bank of China added a net 90 billion yuan ($14 billion) of funds via open market operations on Wednesday, in a bid to ensure stable liquidity at quarter end, according to calculations by Bloomberg.

The PBOC injection “suggests that they are monitoring the situation closely and are ready to step in if the economy comes under risk,” said Jun Rong Yeap, a market strategist at IG Asia Pte.