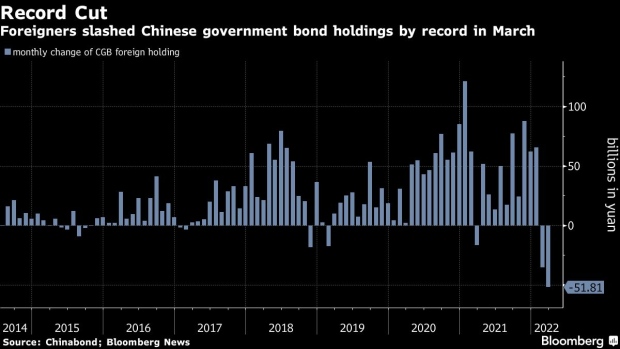 A police officer in personal protective equipment (PPE) stands guard at a checkpoint during a lockdown due to Covid-19 in Shanghai, China, on Monday, May 16, 2022. Shanghai is on the brink of meeting the goal of three days of zero community transmission of Covid-19 that officials have said is required to start easing the harshest elements of the city’s punishing six-week lockdown. , Bloomberg

(Bloomberg) -- China’s main bond trading platform for foreign investors has quietly stopped providing data on their transactions, a move that may heighten concerns about transparency in the nation’s $20 trillion debt market after record outflows.

Daily trades by overseas investors were last provided for May 11 by the China Foreign Exchange Trade System, according to people familiar with the matter, who asked not to be identified discussing private information. The data showed sizable net foreign outflows that day, with some selling also seen for most days in April, the people said.

It’s unclear why CFETS stopped publishing the figures, which are typically updated one day later, the people said. There was also no indication of whether the move was temporary or related to the lockdown of Shanghai, the nation’s onshore financial capital. A spokesperson for CFETS -- which is affiliated with China’s central bank and compiles data on the so-called interbank market -- didn’t respond to a request for comment.

The missing data add to the uncertainty over capital flows into and out of China, as Covid lockdowns and questions over concrete policy support spur market volatility. Global funds sold record amounts of Chinese sovereign debt in February and March as their yield premium over Treasuries collapsed and money managers fretted about a supply surge.

While China has taken major steps in recent years to improve foreign access to its debt and equity markets, international investors have long had concerns about the reliability of the nation’s economic statistics and other official data. Those concerns tend to rise during periods of economic and financial-market turbulence.

Transactions by domestic investors on CFETS are still getting published, the people said. The debt traded on its platform include sovereign, provincial, policy banks and credit.

Other than the interbank market, the biggest in the nation, bonds are traded on exchanges.

Aside from the CFETS figures, investors are also awaiting the delayed release of an April report on bond trading by clearing house Chinabond. The information, which is typically published by around the 10th of every month, is a summary of custodial bonds and includes the balance of domestic debt held by overseas institutions.

A Chinabond representative told Bloomberg that it was still compiling the April report, and didn’t provide a reason for the delay. Overseas investors offloaded a record 51.8 billion yuan ($7.7 billion) of Chinese sovereign debt in March, according to Bloomberg calculations based on data from the clearing house.

While outflows probably slowed overall in April, the sudden decline of the yuan during the month likely stoked selling again, according to Becky Liu, head of China macro strategy at Standard Chartered Bank Plc. The Chinese currency had sank 4% against the dollar last month.

Analysts at Barclays Bank Plc and Natixis SA have said that overseas investors may continue to trim Chinese bond holdings as the nation’s Covid lockdowns weigh on growth and a stronger dollar saps demand for emerging-market debt.