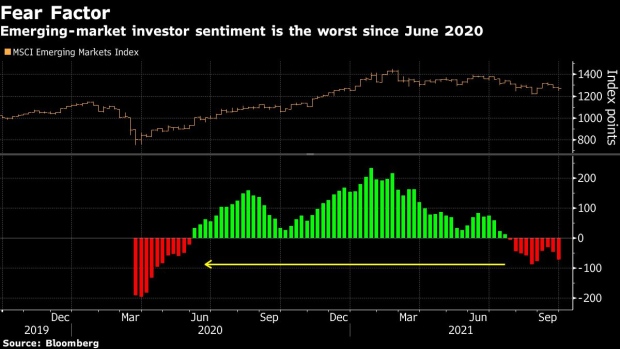 A researcher works at the Bloomage Biotechnology Corp. research and development laboratory in Shanghai, China, on Friday, April 23, 2021. Bloomage, which has developed special fermenters to bring down the cost of manufacturing hyaluronic acid, or HA, makes hundreds of variations used in skin creams, medications, and more. Photographer: Qilai Shen/Bloomberg , Bloomberg

(Bloomberg) -- Emerging-market investors are about to find out whether there’s more to worry about in China than just the Evergrande debt crisis.

Official and private gauges of Chinese manufacturing are due out Thursday, with expectations they’ll add to evidence of sputtering growth. Concerns that the world’s second-biggest economy is slowing have hobbled the currencies and stocks of developing nations in recent weeks, erasing gains sparked by the U.S. Federal Reserve’s assurance of a calibrated tapering of its stimulus measures.

China has now emerged as their biggest risk. While Evergrande has sparked fears of a property-market slowdown, investors worry even more about the stalling of the broader economy due to virus curbs and spending cuts by consumers. Some are looking to diversify into markets less reliant on China’s growth, such as India and Egypt.

“The risks of contagion and further slowing in the property sector are genuine,” Goldman Sachs Group strategists, led by London-based Kamakshya Trivedi, wrote in a note last week. “However, for the rest of emerging markets, what matters more is the negative impact on Chinese growth, and by extension commodity prices, and whether policy makers step in to offset those downside risks.”

This week’s Chinese data will also act as a barometer of demand for commodities such as oil and copper, which exporting nations from Angola to Peru depend on to drive their own growth.

The Caixin gauge of China’s factory activity showed a contraction for August, the first reading below 50 since April 2020. The official measure of manufacturing has declined for five successive months. Retail sales, industrial production and investment have all slowed, confirming the deceleration.

Meanwhile, Evergrande is developing into a cliffhanger, with another payment due this week as part of $669 million of bond interest that must be paid through the end of this year. Regardless of the immediate outcome, working off the leverage incurred over a slowing property market may be messy and take some time, according to Goldman strategists.

China’s economy will now grow at a slower-than-expected pace in the years through 2023, according to Bank of America Corp. It lowered its forecast for 2022 to 5.3% from a previous estimate of 6.2%.

Some investors are trying look past the Evergrande crisis on growing optimism the Chinese government will step in at some point and prevent wider contagion.

“The extent of the Evergrande fallout is taking center-stage but Chinese state support for its operations as opposed to its listed securities should allay some of the worst-case-scenario fears,” said Hasnain Malik, the Dubai-based head of research at Tellimer Research.

Worries over China come after a respite from the Fed, which said it was getting close to reducing stimulus but kept the door open to extend it as needed. Chair Jerome Powell also stressed that the process wouldn’t offer a direct signal on the timing of lifting rates.

“The message from the Fed was one of a dovish policy and ongoing market support if needed, which is positive for risk assets,” said Todd Schubert, head of fixed-income research at Bank of Singapore Ltd.

Those who believe China’s troubles won’t spell doom for emerging markets was a whole are betting that it leaves room for some smaller nations to start outperforming.

Emerging economies with high real interest rates are better prepared for a world where the U.S. tightens policy and China slows down, according to Tellimer’s Malik. Markets including Egypt, Ghana, Indonesia, Vietnam and the United Arab Emirates look promising, he said.

Bank of Singapore, while still buying BB and BBB names in China’s property sector, is looking for bargains in Indonesia and India in case a contagion-induced selloff materializes.

“Indonesia and India are the largest Asian credits that remain as options for diversification away from China,” Schubert said.

These are the events and data to look out for this week: