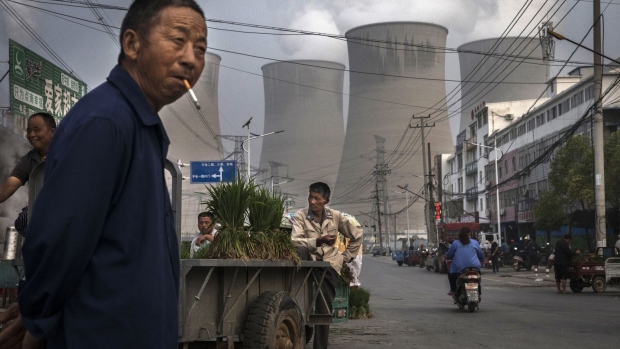 HUAINAN, CHINA - JUNE 14: Chinese street vendors sell vegetables at a local market outside a state owned Coal fired power plant near the site of a large floating solar farm project under construction by the Sungrow Power Supply Company on a lake caused by a collapsed and flooded coal mine on June 14, 2017 in Huainan, Anhui province, China. The floating solar field, billed as the largest in the world, is built on a part of the collapsed Panji No.1 coal mine that flooded over a decade ago due to over-mining, a common occurence in deep-well mining in China's coal heartland. When finished, the solar farm will be made up of more than 166,000 solar panels which convert sunlight to energy, and the site could potentially produce enough energy to power a city in Anhui province, regarded as one of the country's coal centers. Local officials say they are planning more projects like it, marking a significant shift in an area where long-term intensive coal mining has led to large areas of subsidence and environmental degradation. However, the energy transition has its challenges, primarily competitive pressure from the deeply-established coal industry that has at times led to delays in connecting solar projects to the state grid. China's government says it will spend over US $360 billion on clean energy projects by 2020 to help shift the country away from a dependence on fossil fuels, and earlier this year, Beijing canceled plans to build more than 100 coal-fired plants in a bid to ease overcapacity and limit carbon emissions. Already, China is the leading producer of solar energy, but it also remains the planet's top emitter of greenhouse gases and accounts for about half of the world's total coal consumption. (Photo by Kevin Frayer/Getty Images) , Getty Images via Bloomberg

(Bloomberg Opinion) -- Beijing is scrubbing up. Late last week, the central bank excluded so-called clean coal from a draft list of projects eligible for green bonds. It’s a significant move that puts the world’s number-two issuer on the path toward consistency with international norms, making it easier to attract the foreign capital required to finance hundreds of billions of dollars of environmental fixes. The next logical step will be to tackle what companies are allowed to do with the cash they raise. So-called transition bonds that aim to help sellers switch to a cleaner way of doing business could help soften the blow.

The world’s top emitter of carbon dioxide has been something of a trailblazer in environmental finance. From its first green bond in 2015, it jumped to well over $50 billion issued in 2019, up by a third from the previous year, according to a soon-to-be-released report from Climate Bonds Initiative, a U.K.-headquartered non-profit. Yet only a portion of that sum met international standards. In 2018, CBI excluded about a quarter of the total for failing to align with those rules. The compliant percentage has shrunk, to closer to $30 billion last year, according to both CBI and BloombergNEF —  in part because of an increase in non-financial issuers.

If confirmed after public consultation, the list published last Friday tackles the most glaring discrepancy with global standards: a permissive stance on fossil fuels. Until now, more efficient coal-fired power projects might qualify, say, or an oil refiner improving its energy efficiency. The importance of the move goes beyond that, though, given Beijing’s top-down approach to going green.

China has chosen to signal that it can align fragmented regulatory standards and, after months of discussions, has brought the whole structure closer to international rules. It has made the reduction of greenhouse gases a priority, above simply tackling air pollution. This is especially true if the rules make it harder for China to fund coal projects overseas.

Importantly, officials have done all of this as climate finance moves forward, with the European Union standardizing its own definition of green, and when China’s own bond market is already opening up. That increases the potential reward.

It matters that the harmonization can go both ways, given Beijing’s record of innovation. The People’s Bank of China was one of the first central banks to allow green bonds as collateral, and has been a pioneer when it comes to reporting requirements. The country has also experimented with the use of pilot zones for green debt tools.

Reducing discrepancies will, at a basic level, cut the cost for foreign investors wanting to put capital into China’s onshore green offerings, because it obviates the need for extra checks to ensure there is no hidden ugly stuff. And that matters, for a domestic bond market that remains relatively unexplored by outsiders, and insufficiently deep to wean the country off bank lending. It matters more in a post-pandemic recovery, when green issuance is faltering.

It also suggests the next step in seeking further alignment will be tackling the use of proceeds. The National Development and Reform Commission allows state-owned enterprises issuing green bonds to use up to half for general working capital. The more accepted limit for non-green activities is usually 5%. Yet Mervyn Tang, global head of ESG research, sustainable finance, at Fitch Ratings, points out that shift will be less challenging than the tussle over what makes the list at all. After all, companies targeting overseas investors will align spending plans with international thresholds even without explicit changes.

Certainly, there are pricing incentives to do so, and to accept even tighter rules, like increased verification and tougher assessment of actual impact. Chinese green bonds had an average coupon rate 15 basis points lower than regular offerings in 2019, according to BloombergNEF.

The only question is what happens, as will increasingly be the case, when it isn’t possible to move straight from brown to green. Or when brown is no longer just discouraged, but penalized. One way to keep moving in a climate-friendly direction without turning off the taps — or, worse, encouraging inertia — may be to consider a role for transition bonds, as issued by France’s Credit Agricole SA late last year. The bank raised 100 million euros ($112 million) to be used for loans to companies that are making the shift. Purists will recoil, but with the cost of China’s environmental overhaul adding up, the perfect can’t be the enemy of the good.