China’s government is talking up the prospects for a rapid economic rebound from the coronavirus, even as the global economy sees further lockdowns to curb the spreading disease.

Since Friday, the premier, who leads economic policy making, and a senior central-bank official, have pointed to the control of the outbreak and the resumption of activity as reasons for optimism with regards to China’s outlook.

At the same time, the nation is facing the risk of further job losses and slumping external demand as the U.S., the U.K. and the European Union all tighten restrictions on human activity as the virus exacts a rising death toll. Economists expect China to post the slowest growth since the end of the Mao era this year.

“Economic indicators will likely show significant improvement in the second quarter and the Chinese economy will return to its potential output level rather swiftly,” People’s Bank of China Deputy Governor Chen Yulu told reporters in Beijing on Sunday.

Chen signaled that the government would continue its current moderate stimulus policies. Consisting so far of adjustments to tax policy, trimmed interest rates, cheaper loans, and extra liquidity, China’s actions are in stark contrast to the trillions of dollars in fiscal support and steep cuts to interest rates being enacted in the U.S. and Europe.

On Friday, Premier Li Keqiang said the government would “optimize” policies to help the rebound and ensure stable employment. He also earlier said that most of China is now considered to be at “low risk” from the virus and should return to normal work and life.

There’s indeed evidence that factories and workplaces are increasingly “back to normal,” with Bloomberg Economics estimating that 85% of activity has returned, excluding the center of China’s outbreak, Hubei province. 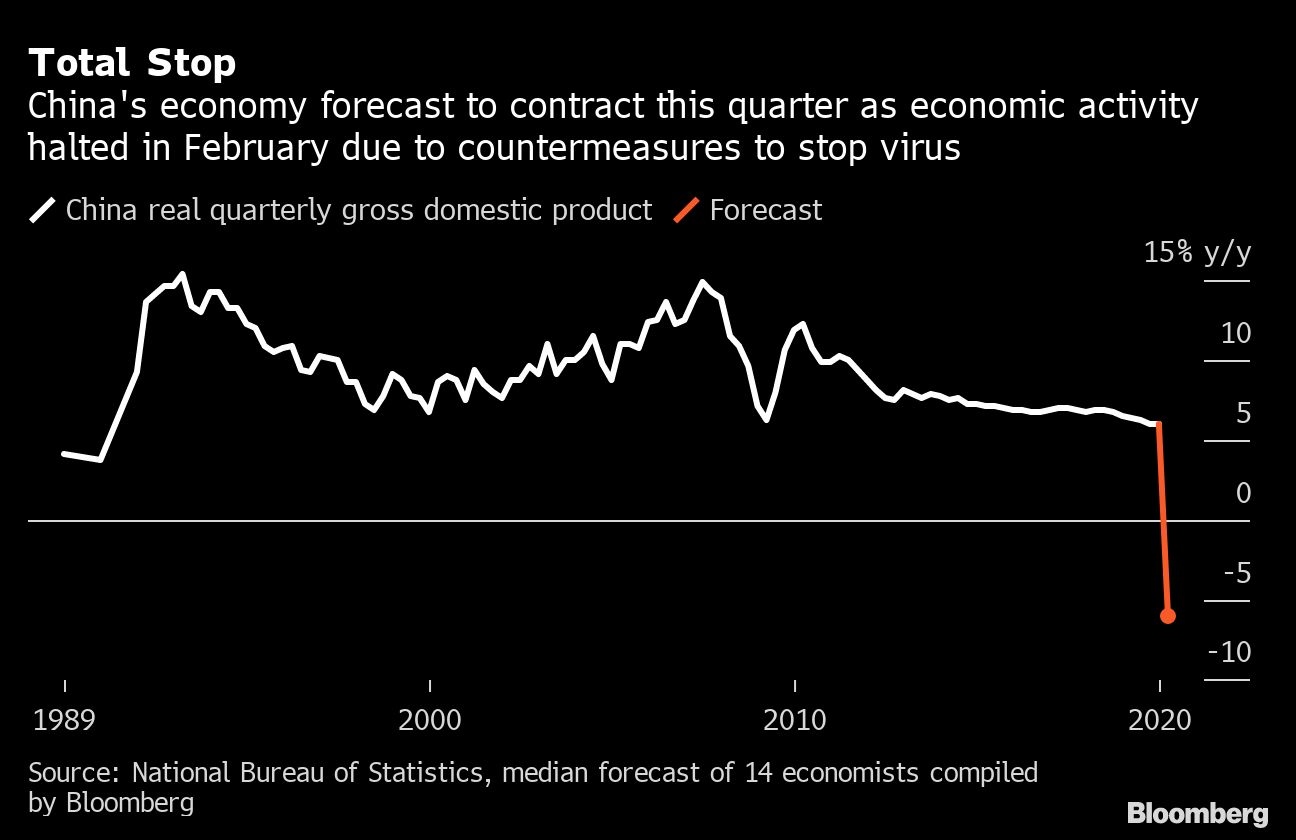 People will continue to return to work but at a slower pace, as levels in the industrial sector are near normal, David Qu of Bloomberg Economics wrote. “The focus is now on tertiary industries and smaller manufacturing firms. The demand side, though, may be a constraint, particularly for the services sectors.”

Almost 70 per cent of key export and import firms have resumed work, with production capacity above 70 per cent, the Ministry of Commerce said last Thursday. However, workers might be returning to the production line just in time for a major hit to demand coming from the developed economies that are now shutting down.

The return rate for services such as restaurants and hotels was at 60 per cent according to the commerce ministry last Thursday, lower than for industrial firms.

In addition, almost half of China’s listed consumer companies don’t have enough cash to survive another six months, with restaurants in the worst shape as the coronavirus outbreak has kept consumers at home, according to data compiled by Bloomberg and company reports covering 50 listed firms.

It remains to be seen whether Beijing has done enough to save the legion of small businesses in China that form the backbone of employment. The government will make “every effort” to ensure the survival of those firms, Li said Friday according to a statement.

Among the measures already announced to help smaller firms, the central bank will provide a total of 500 billion yuan (US$70 billion) to banks so they can give cheap loans, and the due dates for loans can be extended.

In addition, taxes, social security and unemployment insurance payments can be lowered, and there will be support for paying rent.

Policy makers remain wary of a return to the massive monetary and fiscal injections that came after the global financial crisis, as they caused a debt run-up that the country is still struggling to recover from. However, if unemployment continues to rise from 6.2 per cent in February, it’s likelier that the government will abandon its reservations about more stimulus.

For now, the official line is that economic targets (which haven’t actually been released for 2020) can be met despite the outbreak. The expected target before the disease outbreak was “about six per cent."

Economists have slashed their forecasts since the release last week of data showing a historic collapse in economic activity in January and February. The median forecast is for growth of three per cent this year, the lowest since 1976.

More policy support will be rolled out in the coming weeks and months, including increased spending on healthcare and infrastructure investment, UBS AG’s Chief China Economist Wang Tao wrote in a report to clients last week.

“Even more policy measures could come through later as global growth prospect deteriorates further,” she wrote. “Nevertheless, we do not think policy stimulus, no matter how strong, can get China’s growth above five per cent. In fact, three per cent may be hard to achieve this year.”