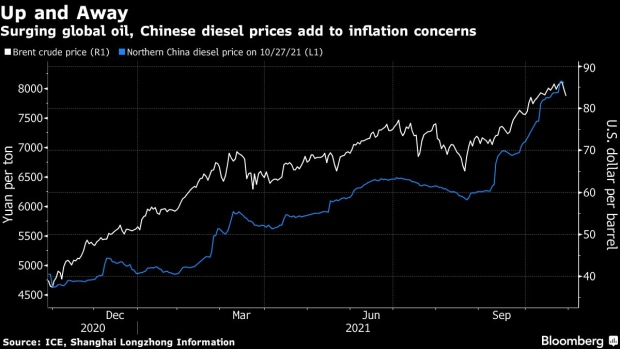 (Bloomberg) -- China is canvassing oil refiners for solutions to its evolving energy crisis, as the supply issues spill over into fuels with diesel now being rationed ahead of winter.

The closed-door talks were held last week between officials from the National Development and Reform Commission and independent and state oil refiners, although no policy decisions were immediately made, said people familiar, who asked not to be identified discussing a private matter. Nobody responded to a fax sent to the NDRC seeking comment on the discussions.

Questions asked by officials included whether Chinese refiners have the ability to raise processing rates to produce more fuel, whether they can import more diesel and gasoline, and if they can obtain crude at a reasonable price to try and manage inflationary pressures, the people said.

China has been rocked by the energy crisis that’s led to power rationing and blackouts, and more recently long queues of vehicles snaking from some filling stations as customers are restricted to limited diesel volumes. During the talks, another concern voiced by officials was the nation’s recent offers of oil from strategic petroleum reserves to domestic refiners.

The measure was taken to cool rising oil prices but had little impact, with a global rebound from the pandemic helping to power crude to multiyear highs. China has had some success intervening in the market before, most recently in coal, where it stepped in to implement price ceilings that triggered a collapse in the futures and physical market. Trying to influence global oil markets is more complex, however, with OPEC+ returning output at a slower pace and demand from other nations intensifying ahead of winter.

In China’s widely publicized auction of oil reserves last month, its first in history, the nation offered about 7 million barrels of crude, less than a day’s worth of the country’s overall consumption.

China is facing the prospect of replenishing dwindling inventories at higher prices after the release did little to quell bullish sentiment. Another option is a loan mechanism where oil would be provided to refiners, with comparable supply later returned, rather than an outright sale, according to people familiar. That would prevent reserve figures falling below a level that would necessitate buying.

While accurate estimates of the size of China’s crude and fuel hoard are hard to come by, oil-market observers and satellite-tracking companies canvassed by Bloomberg agreed that the nation has been drawing down those inventories this year as higher oil prices discouraged restocking.

Chinese crude stockpiles were at 919 million barrels as of Oct. 24, or 59% of the nation’s storage capacity, according data analytics firm Kayrros. That’s the lowest since November 2018 in terms of filled capacity. Of that inventory, strategic reserves account for about 345 million barrels, while the remainder is commercial stockpiles, the company said.