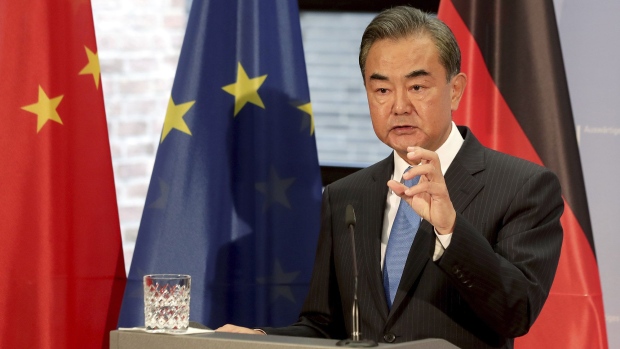 (Bloomberg) -- China and the European Union are partners, not competitors, and cooperation will help both sides, Chinese Foreign Minister Wang Yi told his Polish counterpart as the Asian nation seeks support after an investment deal with the bloc was put on hold.

Poland’s Foreign Minister Zbigniew Rau said his country believes a China-EU investment deal is beneficial for both sides, and the two should deal with disagreements properly, according to a Chinese government statement on Saturday.

Rau and foreign ministers from Serbia, Hungary and Ireland are visiting China from May 29 to May 31 after an invitation from Wang. Rau and Serbia’s Nikola Selakovic met him in the southwestern Chinese city of Guiyang on Saturday in separate meetings.

European lawmakers overwhelmingly approved a resolution this month to withhold ratification of an investment agreement with China in response to sanctions against members of the bloc. China retaliated against the U.S., U.K. and EU over sanctions related to allegations of human rights abuses in the western region of Xinjiang.

The investment pact had been seen as proof of both Europe’s independence from the U.S. and China’s ability to collaborate with American allies who adopted a more moderate approach. Attitudes in several European capitals have grown less favorable toward China since the coronavirus outbreak fueled a range of diplomatic disputes.

Much of global criticism toward China has focused on its treatment of Muslim Uyghurs and other minorities in Xinjiang. China has waged a vigorous international campaign against the claims, saying it’s trying to fight terrorism and improve the livelihoods of minorities.

Poland understands and respects China’s legitimate rights and interests and would like to make active efforts for the healthy development of EU-China relations, the statement from the Chinese government cited Rau as saying. Poland also welcomes Chinese investment and won’t adopt discriminatory measures against its companies, Rau said, adding the country is also willing to expand agricultural exports to China.

In the meeting with Selakovic, Wang said China supports plans by its Covid-19 vaccine manufacturers to talk to Serbia on joint production in the European nation. The two sides agreed to accelerate infrastructure and energy cooperation, including one involving the Serbian section of the Budapest-Belgrade railway. The rail project is mostly financed by loans from China.

China’s cooperation with central and eastern European nations are focused on economy and trade, and will help balance the development of Europe, Wang said.