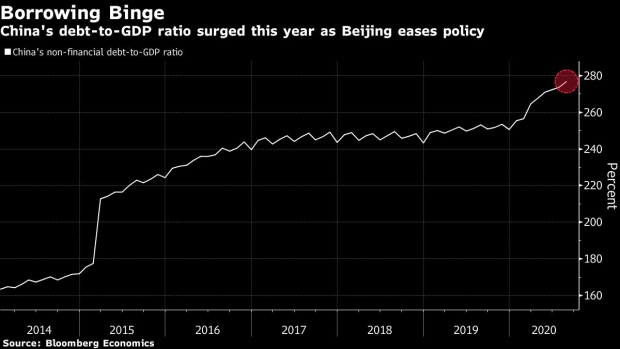 (Bloomberg) -- China said it will implement “reasonable” monetary policy next year and ensure fiscal plans are “sustainable,” signaling it will limit its stimulus measures as the economy continues to recover.

The comments were published by state media Friday after the Communist Party’s annual Central Economic Work Conference. The ruling party uses the event to set its policy framework for the coming year, with analysts expecting a renewed focus in 2021 on slowing the pace of debt growth and insulating the economy from tensions with the U.S.​

The language around monetary and fiscal policy was a change from earlier guidance, indicating a more measured approach to stimulus in 2021 after this year’s boost. At the same time, authorities vowed there wouldn’t be a quick reversal as the economy’s rebound “is not yet solid.”

China should “maintain necessary support” for the recovery, “make policy operations more precise and effective” and “make no sharp turn,” the conference decided.

The ruling party is expected to flesh out details of its policies and publish more precise targets when the National People’s Congress meets, usually in March.

China is the only major economy expected to grow this year, thanks to its effective control of the coronavirus and fiscal and monetary stimulus. The recovery so far has relied on surging property and state-led infrastructure investment, with private-sector manufacturing investment and household consumption lagging behind last year’s levels.

“Although cyclical policy would normalize next year from this year’s significant expansionary stance, we believe the likelihood of a “policy cliff” is low and the government would be mindful of the timing and magnitude of exit/reduction of policy support,” they said.

With the growth forecast to accelerate to more than 8% in 2021 from 2% this year, Beijing is turning its focus once again on reducing risks in the economy as debt soars.

The government will aim to “keep the macro-leverage ratio basically stable” next year, according to state media. Authorities will also seek to slow the growth in money supply and aggregate financing to match the expansion of nominal economic growth, which should keep the ratio of debt to gross domestic product about the same level as now.

Houze Song, a research fellow at the Paulson Institute, said the latest policy signal from the economic work conference is “growth negative.”

“Local government debt is back to the top of Beijing’s agenda,” he said. “Since local expenditure accounts for the majority of fiscal support, fiscal consolidation at local level will be a significant drag on growth next year.”

Beijing’s aim to increase technological self-sufficiency following tensions with Washington was clear from the statement, with increasing “strategic scientific and technological strength” listed as next year’s most important economic task. That was followed by increasing “independent control” over supply chains, particularly for key technologies where “choke points” exist.

Other highlights from the statement:

(Updates with comments from economists)