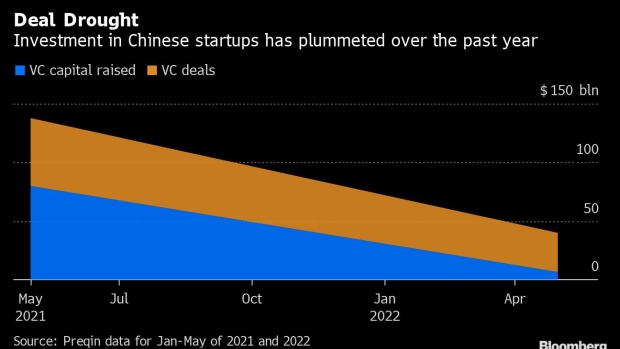 (Bloomberg) -- Venture firm IDG Capital is poised to raise about $900 million for a new fund focusing on investment in China, a rare feat amid skepticism about the political and market risks of Asia’s largest economy.

Most investors are existing backers of IDG, which has been putting money into Chinese technology firms for nearly three decades, according to people familiar with the matter, who asked not to be named because the matter is private. The new fund will focus on technology startups, the people added.

The fundraising stands out as venture capital firms in China are struggling to raise cash amid the nation’s regulatory crackdown on private enterprise and an economic slowdown brought on by the pandemic. Putting aside this year’s stock rally, China is still weathering a decline in venture capital investments, despite once being touted as a primary rival to Silicon Valley.

Chinese tech stocks have taken a beating in the past year, driving down valuations in the industry, and spurring risk averse investors who still want the exposure to allocate money into the country’s top investment outlets instead of less established ones.

IDG Capital has been investing in China since 1993, making bets on companies including Baidu Inc., SenseTime Group Inc., Xiaomi Corp and Tencent Holdings Ltd. It’s invested in more than 1,300 companies, with 400 successful exits, according to the company’s website.