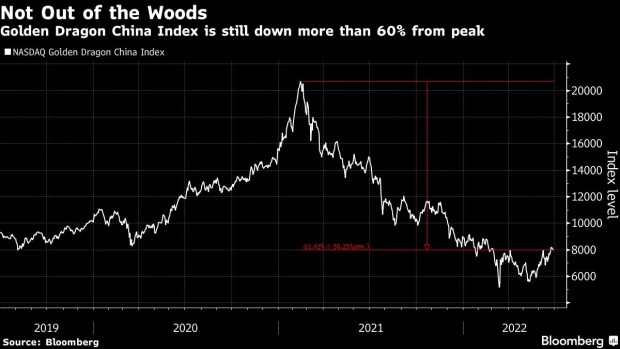 (Bloomberg) -- No one would have predicted it a few months ago, but Chinese technology stocks now are a rare pocket of strength in global markets. A wave of selling by corporate insiders is calling into question how far the rally can go.

JD.com Inc. insiders were net sellers of shares in May and June, the first back-to-back selling since November, Bloomberg-compiled data show. The major backer of Tencent Holdings Ltd. said this week it will further cut its stake, while SenseTime Group Inc. nosedived after cornerstone investors offloaded shares at the first opportunity since the artificial intelligence giant’s initial public offering in December.

The divestitures add to the pressure on Chinese tech stocks after they staged a strong comeback from a multiyear trough thanks to a softening regulatory stance and an easing of Covid-19 restrictions. The Nasdaq Golden Dragon China Index of U.S.-listed companies this week is on track to post its first weekly decline since mid-May.

While insider selling isn’t always a bad sign, it’s closely watched as a barometer of shifts in the attitudes of presumably well-informed investors.

Insider selling “could be an overhang for some of the stocks in the near term and will affect sentiment,” said Jasmine Duan, investment strategist at RBC Wealth Management.

To be sure, a growing chorus of Wall Street banks and investors is turning more sanguine on China’s tech sector. China is the best place to buy in the sector right now because valuations in the US remain too high, the global head of asset allocation research at Invesco Ltd. said this week.

Yet some industry insiders have been painting a more downbeat picture, warning that the enormous growth rates of the past two decades aren’t coming back. The Golden Dragon gauge is still about 60% below its 2021 record even after the recent surge.

To counter the negative impact of insider selling, some companies have also stepped up share buybacks. In the two days following major shareholder Prosus NV’s announcement of the planned stake sale, Tencent bought back 1.66 million shares, according to stock exchange filings.

Alibaba Group Holding Ltd., the biggest company in the Golden Dragon index, has surged 46% since the benchmark bottomed in March. The rally ran out of steam in June, though, as the shares bumped into the 200-day moving average.