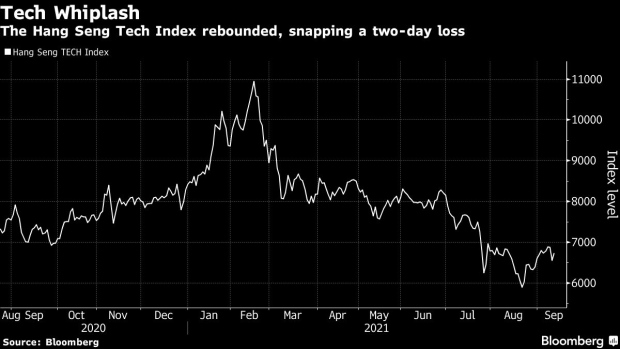 (Bloomberg) -- Chinese technology shares rebounded, snapping a two-day loss, after a newspaper report clarified that Beijing was slowing down instead of halting new game approvals.

The return to buying reflected easing investor concerns on the broader tech sector after the South China Morning Post corrected a Thursday report that the government had temporarily halted the approval of new online games. It clarified that there is a slowdown in the process, rather than a complete freeze.

While people have been mentally prepared for more crackdowns, the declines in Tencent and its peers on Thursday may have been overdone, said Linus Yip, chief strategist of First Shanghai Securities. The selloff in other non-gaming stocks like Meituan was “miscalculated,” he added. Shares of the delivery company climbed as much as 5.6%, more than recovering the previous session’s loss.

Bargain hunters have been seeking opportunities in the beaten-down Chinese tech shares after an epic plunge earlier this quarter triggered by Beijing’s move to ban after-school tutoring firms from making profits. But sentiment remains fragile amid the ongoing clampdowns.

The Hang Seng Tech Index is up around 14% from its Aug. 20 low, but still some 39% down from its February peak.