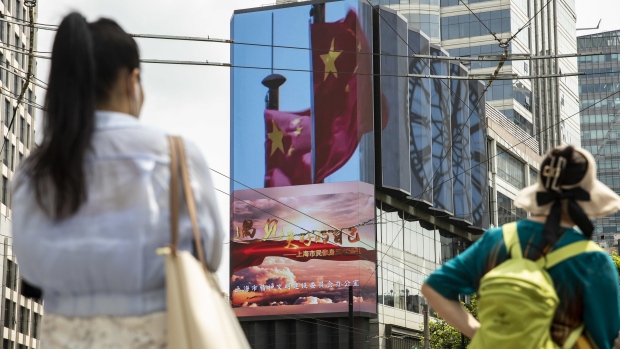 A public screen displays an image of Chinese flags in Shanghai, China, on Wednesday, Aug. 18, 2021. President Xi Jinping said China must pursue "common prosperity," in which wealth is shared by all people, as a key feature of a modern economy, while also curbing financial risks. Photographer: Qilai Shen/Bloomberg , Bloomberg

(Bloomberg) -- Chinese tech stocks slumped as the U.S. added to its moves to restrict the nation’s companies with a ban on China Telecom (Americas) Corp.

The Hang Seng Tech Index, which tracks mostly Chinese technology firms traded in Hong Kong, declined as much as 3%. More broadly, the CSI 300 Index slid as much as 0.8%, while the Hang Seng Index lost 1.2%.

The U.S. Federal Communications Commission on Tuesday voted 4-0 to cancel permission to operate in the U.S. for the unit of one of three leading communications providers in China. Though the firm doesn’t do a lot of business in the U.S., being barred from the market is significant coming on the heels of the moves against other giants of China’s burgeoning tech industry, including Huawei Technologies Co.

The stock declines followed a slump in Chinese shares listed in the U.S. overnight, with the Nasdaq Golden Dragon China Index tumbling more than 4% in its biggest loss in more than a month.