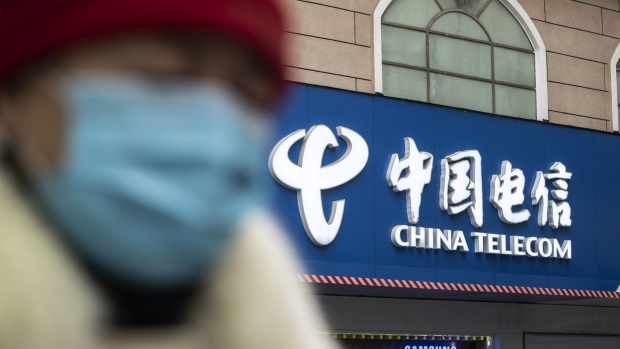 A pedestrian walks past a China Telecom Corp. store in Shanghai, China, on Wednesday, Jan. 6, 2021. The New York Stock Exchange is considering reversing course a second time to delist three major Chinese telecommunications firms after conferring further with senior authorities on how to interpret an executive order President Donald Trump issued Nov. 12, according to people familiar with the matter. Photographer: Qilai Shen/Bloomberg , Bloomberg

(Bloomberg) -- China Telecom Corp., one of the three mainland telecom carriers booted off the New York stock exchange, is planning to raise 47.1 billion yuan ($7.3 billion) from a listing in Shanghai that is set to be the world’s biggest so far this year.

China Telecom was one of three of China’s big state-owned carriers whose American depositary receipts were delisted by the New York Stock Exchange in May this year, following an executive order issued by former president Donald Trump barring U.S. investments in companies with ties to the Chinese military.

The pivot back home for funds comes as Beijing extends a crackdown on its companies that are are listing overseas and as tensions between the U.S. and China continue to ratchet up.

China Telecom, which went public in Hong Kong and New York in 2002, has had to scale back its offering in Shanghai, however. The sale of 10.4 billion A shares in the offering, excluding the greenshoe option, is down from the 12.1 billion shares it had said it would initially sell in April.

Still, if the Chinese company exercises an over-allotment option, the company could raise as much as 54.2 billion yuan from its sale of A-shares, according to a statement to the exchange.

China Telecom’s listing will help it diversify its financing channels, according to analysts. The telecom titan needs to ramp up its financing as it backs China’s ambitions to lead in developing investment-heavy super-fast 5G networks.

Proceeds from the Shanghai IPO will be used for a 5G industrial Internet construction plan, cloud-network integration, a new information infrastructure project and research and development, according to China’s Telecom’s filing to the Shanghai stock exchange. Mainland brokerages CICC and China Securities are the joint sponsors on the listing.