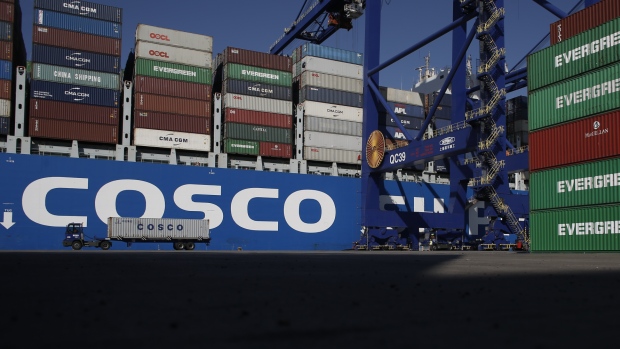 China plans to ask the U.S. to lift sanctions on its biggest shipping company at high-level trade negotiations in Washington this week, people familiar with the matter said.

Officials plan to raise the issue of penalties against the Dalian units of China COSCO Shipping Corp., which the U.S. accuses of knowingly violating restrictions on carrying Iranian petroleum, said the people, who asked not to be identified discussing a private matter. Four other Chinese entities were also sanctioned last month along with Cosco. The people did not say if the Chinese delegation planned to seek relief for those companies.

The U.S. decision to impose sanctions on Chinese shipowners including COSCO Shipping Energy Transportation Co. prompted a bidding war as charterers scrambled to replace vessels owned by targeted companies. It sent costs for ships with oil-carry capacities ranging from 650,000 to 2 million barrels to a 2019-high, while supertanker day rates for the Middle East to China route surged to its highest in probably 11 years.

The penalties against the Chinese companies bar U.S. citizens and entities from dealing with the firms, effectively blocking them from American banks at the heart of the global financial system. China’s National Development and Reform Commission and Ministry of Commerce didn’t immediately respond to faxes seeking comment on the request. China Cosco Shipping did not respond to an email and fax.

Top negotiators from both sides are scheduled to meet on Thursday and Friday for the first face-to-face talks between senior officials since July. A Chinese official said earlier the country was open to reaching a partial deal. People familiar said separately the U.S. is seeking to include a previously-agreed currency pact in any agreement reached.

While the sanctions specifically targeted COSCO’s Dalian subsidiary, charterers indiscriminately shunned all tankers owned by its parent company and other units for fear of running afoul of the rules. This week, however, some oil traders once again started booking tankers operated by COSCO, although the charters are not expected to immediately bring calm to markets.