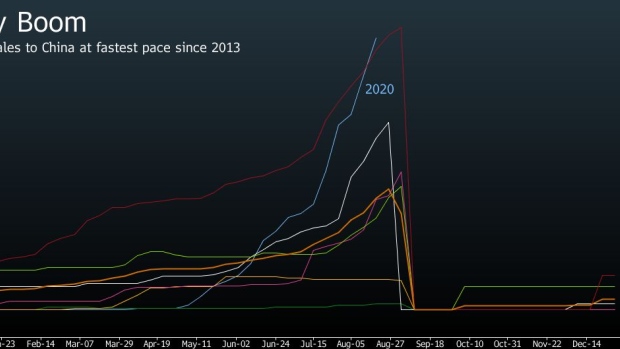 Soybeans sit in a semi trailer during harvest in Wyanet, Illinois, U.S., on Saturday, Oct. 19, 2019. Hedge funds increased their net-bullish wagers in the soybean market by more than sevenfold as weather concerns creep up for crops in the U.S. and South America. Photographer: Daniel Acker/Bloomberg , Bloomberg

(Bloomberg) -- China is set to buy a record amount of American soybeans this year as lower prices help the Asian nation boost purchases pledged under the phase-one trade deal, according to people familiar with the matter.

The total from the U.S. will probably reach about 40 million tons in 2020, the people said, asking not to be identified because the forecast isn’t public. That would be around 25% more than in 2017, the baseline year for the trade deal, and roughly 10% more than the record set in 2016, according to data from the U.S. Department of Agriculture.

China has been stepping up purchases of American agricultural goods since the end of April, with soybean sales for delivery next season currently running at their highest level for this time of year since 2013. The Asian nation has also set several daily records in corn purchases, putting it on track to exceed for the first time an annual quota set by the World Trade Organization.

Still, China’s purchases of American farm goods over the first seven months of the year are at just 27% of the target value implied by the trade deal, according to Bloomberg calculations using Chinese customs data, with imports of U.S. beans in July at an unusually low level.

The U.S. and China reaffirmed their commitment to the phase-one accord in a biannual review this week, showing a willingness to cooperate on trade even as tensions escalate over issues ranging from data security to the future of democracy in Hong Kong.

The forecast for record purchases comes as supplies from rival Brazil dry up, making U.S. soybeans cheaper. China will ultimately import a best-ever of 96 million to 98 million tons from all nations this year, with 40% to 50% of that coming from the U.S., one person said. Another person said the forecast is for purchases of as much as 40 million tons.

In 2017, China imported a record total of 95.5 million tons in soybeans from around the world, according to customs.

Chinese purchases of American soy are likely to continue into January, as the majority of supplies exported from Brazil in the first month of the year would normally come from stockpiles and thin reserves will hinder shipments, said Daniele Siqueira, an analyst at consultancy AgRural. Other observers also point to a possible delay in plantings in Brazil due to dry weather.

But, soybean prices and the impact of the coronavirus pandemic will ultimately dictate how much China imports, one of the people familiar said.

When contacted for comment, China’s customs referred to publicly available data on the nation’s agricultural purchases.