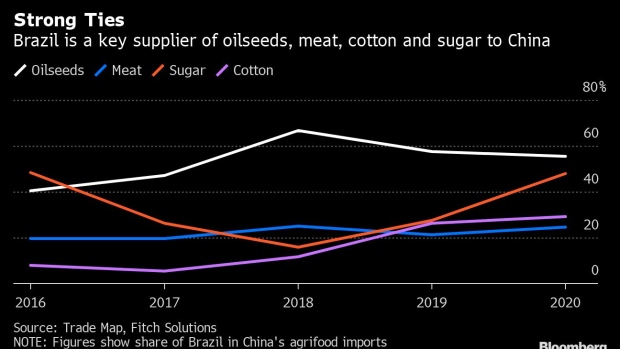 (Bloomberg) -- Relations between the U.S. and China are set to remain strained, which could prompt Beijing to continue diversifying its imports of agricultural goods and keep America’s share low, according to Fitch Solutions.

China may continue to limit soybean and other agricultural purchases from the U.S. as geopolitical tensions persist, the research company said in a note. Brazil will be a winner, with its share in the Chinese market poised to stay elevated and could rise further for some commodities such as meat and cotton.

Even though China has bought record amounts of U.S. farm goods in recent years -- partly due to a trade deal signed in January 2020 and mainly because of a massive expansion in its hog herd -- relations between the world’s two biggest economies have deteriorated. Tensions flared over Hong Kong, Taiwan, human rights, the origins of the Covid-19 pandemic and many other flashpoints.

Other details from the note: