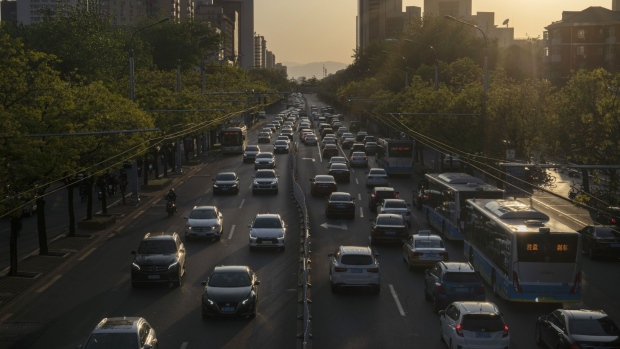 Traffic travel along a road in Beijing, China, on Thursday, April 23, 2020. China's economy will grow by less than 2% in 2020 as the anti-virus shutdowns combine with a collapse in global demand due to the pandemic, according to the latest Bloomberg survey of economists. Photographer: Giulia Marchi/Bloomberg , Bloomberg

(Bloomberg) -- China is poised to give fossil-fuel cars more time to co-exist with electric vehicles, moving away from considerations to have a deadline for a ban on conventional automobiles.

The country shouldn’t set a firm timetable for phasing out fossil-fuel vehicles, the head of a panel advising the government on the matter said at an industry event in Nanjing, China, on Wednesday. National conditions aren’t yet suitable for a target date, said the policymaker, Wang Binggang.

“We don’t want to kill fuel cars,” Wang said in a group interview. “Some countries have a policy banning fuel cars and we are against such moves.” He added that China will actively push the development of hybrid technologies to effectively save fuel and preserve coal reserves.

Wang said his panel’s recommendations will serve as the foundations for national policy. Chinese officials are drawing up plans for the auto industry for 2021 through 2035. Whatever determinations they make will impact local contenders as well as global giants from BMW AG to Tesla Inc. that have spent billions of dollars expanding in the world’s largest market.

China’s last roadmap on the auto industry was announced in 2017, when the government said new-energy vehicles -- all-electric, fuel-celled autos and plug-in hybrids -- would account for more than 20% of the country’s total car sales by 2025. Under the latest proposal, the NEV target for 2025 is 15% to 25%, Wang said.

For 2035, the NEV target will be 50% to 60%, Wang said, as the country looks to lead the world in the push away from internal-combustion engines.

After growing rapidly for several years, electric cars lost momentum in China in mid-2019 as the government moved to limit subsidies. Demand has picked up again in recent months even despite the coronavirus pandemic and investors are showing an increased interest in EV companies. Tesla and NIO Inc. shares have surged this year, and Chinese contenders Li Auto Inc. and XPeng Inc. have had successful stock-market debuts.

China will stick to its goal of electrifying the industry, yet there is a rising emphasis on gasoline-electric hybrids, Wang said. Such cars are an effective way to ensure all vehicles will be at least partially powered by electricity, he said.