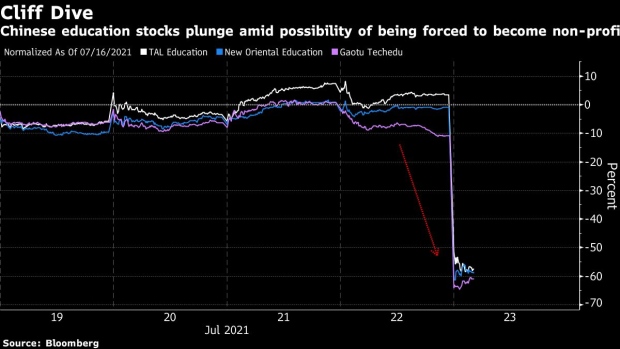 (Bloomberg) -- China announced a broad set of reforms for private education companies, seeking to decrease workloads for students and overhaul a sector it says has been “hijacked by capital.”

The new regulations, released over the weekend, ban companies that teach school curriculums from making profits, raising capital or going public. They can no longer offer tutoring related to the school syllabus on weekends or during vacations. They also can’t give online or academic classes to children under the age of six, a segment of the population that had increasingly been pushed to start studying early.

China’s education technology sector had grown to $100 billion as companies catered to parents seeking to give their children every advantage. Beijing’s reforms will fundamentally alter the business model, forcing firms and their investors into extensive changes. In one dramatic shift, overseas investment is prohibited in companies that teach school subjects and any company in violation must rectify the situation, according to a notice released by the State Council, the country’s most powerful administrative authority.

The regulations will undercut prospects for wide swaths of the industry. One-time stock market darlings TAL Education Group, New Oriental Education & Technology Group and Gaotu Techedu Inc. all plummeted more than 50% on Friday after early reports about the reforms. A generation of younger startups had hoped to go public.

In a series of statements over the weekend, all the major education companies said they would comply with the new rules and support the decisions of the Communist Party.

In a post on its official Weibo account, TAL said it would “fully implement the party’s education policy” and “strive to cultivate people’s talents with all-around development of morality, intelligence and physical health.”

The regulatory assault mirrors Beijing’s broader campaign against the growing power of Chinese internet companies from Didi Global Inc. to Alibaba Group Holding Ltd. It stems from a deeper backlash against the industry, as excessive tutoring torments youths, burdens parents with expensive fees and exacerbates inequalities in society.

The out-of-school education industry has been “severely hijacked by capital,” according to a separate article posted on the site of the Ministry of Education. “That broke the nature of education as welfare.”

Once regarded as a sure-fire way for aspiring children to get ahead, after-school tutoring is now viewed as an impediment to one of Xi Jinping’s top priorities: boosting a declining birth rate.

It’s a stunning reversal of fortune for an industry that had emerged as one of the hottest investment plays in China in recent years. Alibaba, Tencent Holdings Ltd. and ByteDance Ltd. were among the big name backers, along with the overseas players like Tiger Global Management, Temasek Holdings Pte and SoftBank Group Corp.

The sector had attracted billions of dollars because it had been expected to generate 491 billion yuan ($76 billion) in revenue by 2024. Those lofty expectations groomed a generation of promising startups like Yuanfudao and Zuoyebang.

Devised and overseen by a dedicated branch set up just last month to regulate the industry, the rules unveiled Saturday were couched in general terms that could be applied broadly to common practices throughout the industry. The new regulations are focused on compulsory subjects, meaning critical material like math, science and history. Classes for art or music mostly would not fall under the new restrictions.

Among other things, they also ban the teaching of foreign curriculums, tighten scrutiny over the import of textbooks and forbid the hiring of foreign teachers outside of China -- a curb that could have severe consequences for startups like VIPKid that specialize in overseas tutors. The government also ordered local authorities to tighten approvals for companies providing training on extra-curriculum subjects.

It’s ultimately unclear how the government clampdown will turn out -- many believe Beijing won’t seek to annihilate an industry that still plays an essential role in grooming its future workforce.

For now, many investors may choose to err on the side of caution. The government’s desire to assert control over the economy and one of its most valuable resources lies at the heart of recent regulatory clampdowns on online industries. Companies that operate as internet platforms have come increasingly under scrutiny because of the reams of data they collect, stirring government concern over issues of privacy and security.

China will improve the quality of state-run online education services and make them free of charge, the State Council said.