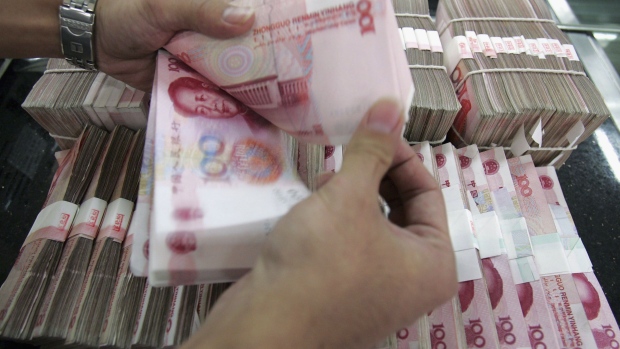 BEIJING - JULY 22: (CHINA OUT) A clerk counts stacks of Chinese yuan at a bank on July 22, 2005 in Beijing, China. The People's Bank of China, the central bank, announced on July 21 to scrap the yuan's decade-old peg to the U.S. dollar, and in stead phase in a flexible mechanism of the yuan exchange rates. The exchange rate of yuan vs U.S. dollar was announced at 8.11 vs 1 on July 22. (Photo by China Photos/Getty Images) Photographer: China Photos/Getty Images AsiaPac , Getty Images via Bloomberg

The State Administration of Foreign Exchange intends to expand pilot schemes to facilitate foreign-exchange settlements in several free trade zones, while preventing financial risks from cross-border capital flows, according to the statement.

The regulator said it aims to maintain forex reserves at above $3 trillion. China’s foreign-currency holdings climbed to $3.112 trillion in July from $3.102 trillion a month earlier. Authorities will crack down on illegal private banking and cross-border gambling to maintain market stability, according to the statement.