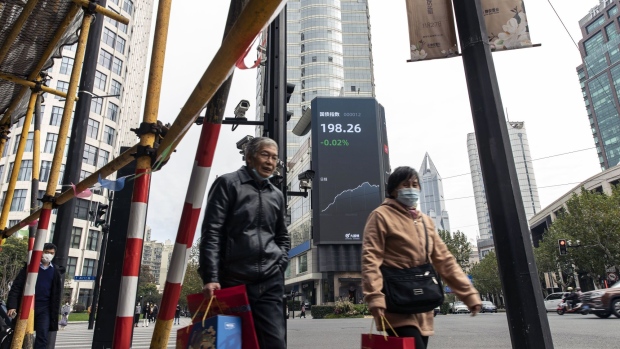 A public screen displaying stock figures in Shanghai, China, on Wednesday, Dec. 7, 2022. China eased a range of Covid restrictions Wednesday, including allowing some people to quarantine at home rather than in centralized camps and scrapping virus tests to enter most public venues — a sharp change in national strategy to quell public discontent and fire up the economy again. Photographer: Qilai Shen/Bloomberg , Bloomberg

(Bloomberg) -- China will sell 750 billion yuan ($108 billion) worth of special sovereign bonds next week, in a move economists said was likely to be a rollover of existing debt rather than representing new stimulus.

The notes will be sold on Dec. 12, and issued to designated domestic banks in the interbank bond market, according to the statement posted on the Ministry of Finance website late Friday. The People’s Bank of China will carry out open market operations with relevant banks, it added. That implies the central bank will likely provide liquidity support for the banks to buy the bonds.

The MOF didn’t specify whether the bonds are new or to refinance notes coming due. China has special bonds worth 750 billion yuan maturing on Dec. 11, according to data compiled by Bloomberg. The notes were part of the debt sold in 2007 to capitalize China Investment Corp., the country’s sovereign wealth fund.

The bonds, a rarely used financing tool that was deployed during the 2020 pandemic slump, will help to “support economic and social” development, the Ministry said Friday. Such “special” sovereign bonds differ from regular sovereign bonds as they are used for specific purposes.

The newly announced issuance will likely be a rollover of the existing bond maturing Dec. 11 and so will not impact the central government’s deficit, Bloomberg Economics said in a note.

“We maintain our forecast that China’s 2023 total government deficit — the combination of general budget balance and increase in local government special bonds — will likely be 7.3 trillion yuan, or 5.6% of GDP,” economist David Qu said in a note

Economists have been calling for Beijing to issue special sovereign bonds to support the economy, which has been hammered by coronavirus measures and a property slump. China’s Politburo, a top decision-making body, has pledged to seek an “overall improvement” in the economy next year as Beijing moves away from its Covid Zero strategy. As a result, economists said it could not be ruled out that the bonds will represent stimulus.

“If these mean additional funds, it suggests a highly proactive economic policy for 2023, confirming the stance alluded to at the Politburo conference,” said Becky Liu, head of China macro strategy at Standard Chartered Bank. “Just the size and dates are making it very confusing — he maturing special bond is widely expected to be rolled over.”