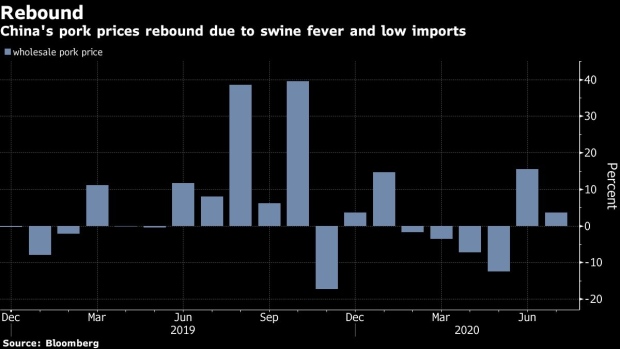 Stamped pig carcasses hang at a pork wholesale market on the outskirts of Shanghai, China, on Tuesday, May 28, 2019. The deadly pig virus that jumped from Africa to Europe is now ravaging China’s $128 billion pork industry and spreading to other Asian countries, an unprecedented disaster that has prompted Beijing to slaughter millions of pigs. Photographer: Qilai Shen/Bloomberg , Bloomberg

(Bloomberg) -- China will sell more frozen pork from state reserves as it seeks to contain rallying prices after the top consumer of the meat halted imports from dozens of overseas producers.

The Asian nation will sell 20,000 tons of pork on Friday, according to a statement by the China Merchandise Reserve Management Center. It also offered 20,000 tons on June 23, bringing total sales from state reserves to 430,000 tons so far this year, according to data from the center, which oversees meat stockpiles.

Domestic wholesale pork prices jumped 16% in June, the biggest monthly gain since October, after the country suspended imports from more than 20 overseas meat plants amid concerns over coronavirus infections among employees at the slaughterhouses. Adding to woes has been floods in China’s south, which have raised fears that outbreaks of African swine fever, a deadly pig disease, could spread among smaller farms.