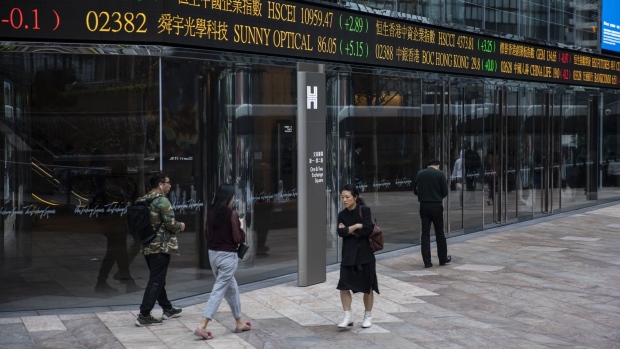 Pedestrians walk past an electronic ticker board displaying stock figures outside the Exchange Square complex, which houses the Hong Kong Stock Exchange, in Hong Kong, China, on Monday, Feb. 11, 2019. The bullish mood building in China’s equity market is entering a new phase, with investors flocking to riskier stocks as trading reopened Monday. , Bloomberg

(Bloomberg) -- China Tourism Group Duty Free Corp. is telling prospective investors it plans to price its Hong Kong share sale in the upper half of its marketed range, according to people familiar with the matter, in what could be this year’s biggest listing in the Asian financial hub.

The world’s largest travel retailer expects to stop taking investor orders around noon Thursday, the people said, asking not to be identified as the information is private. The Shanghai-traded company is offering 102.8 million shares in Hong Kong at HK$143.50 to HK$165.50 each. At the top price, it would raise HK$17 billion ($2.2 billion).

A representative for CTG Duty Free declined to comment.

The offering is poised to inject activity into a slow market for initial public offerings in Hong Kong, where 2022 has seen just $5 billion raised this year, slumping 86% compared with the same period in 2021. It’s a trend also seen globally amid rising interest rates and high inflation. Prior to CTG Duty Free, the year’s largest listing in the city was Tianqi Lithium Corp.’s $1.7 billion share sale last month.

The company suspended a potential $5 billion listing last December, joining a slew of companies that chose not to move ahead with deals amid a choppy market. The seller of tax-exempt goods such as tobacco, wine and perfumes to travelers considered reviving the listing plan to seek as much as $3 billion, Bloomberg News reported in June.

CTG Duty Free’s share sale comes as the tropical island of Hainan, a major tourist destination in China and the source of the majority of the company’s revenue, is seeing one of the worst outbreaks since Shanghai’s lockdown earlier this year. The crisis has stranded 150,000 tourists, leading to protests and some reports of food shortages. Despite strict lockdown measures that have lasted over two weeks now, cases continue to balloon with the province reporting 2,018 cases for Wednesday, pushing national infections to the highest in three months.

The listing has attracted nine cornerstone investors including China State-Owned Enterprise Mixed Ownership Reform Fund, AmorePacific Group and Shanghai Airport Investment Corp. Together, the investors were willing to snap as much as $795 million in shares, according to terms of the deal seen by Bloomberg.

(Updates with context in fifth and sixth paragraphs.)