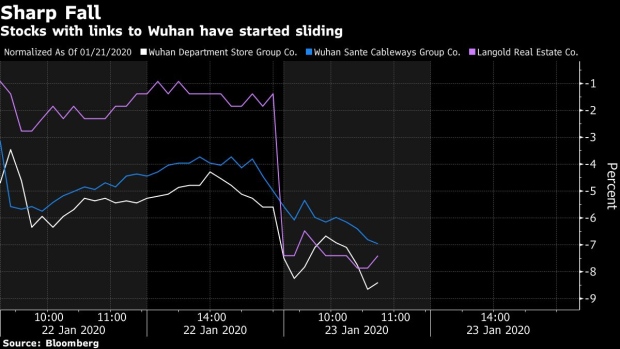 Investors stand at trading terminals in front of electronic stock boards at a securities brokerage in Shanghai, China, on Friday, Oct. 13, 2017. A number of economic indicators show "stabilized and stronger growth" and the momentum of a 6.9 percent expansion in the first six months of 2017 "may continue in the second half," People’s Bank of China Governor Zhou Xiaochuan said. Photographer: Qilai Shen/Bloomberg , Bloomberg

(Bloomberg) -- From a gas supplier to a shopping mall operator, stocks with ties to the Chinese city at the heart of a virus outbreak are falling.

Wuhan Department Store Group Co., which operates several malls in Wuhan, lost 3.1% to head for a weekly drop of 16%. Hubei Heyuan Gas Co., which generates all of its revenue from Hubei province, extended its two-day drop to 10%, the biggest on record.

The new coronavirus, which first appeared last month in the central city, has spread from the mainland to places including Hong Kong and the U.S. It has triggered a global effort to prevent a repeat of the SARS pandemic 17 years ago that killed almost 800 people. The new virus has killed 17 and infected hundreds.

To contact Bloomberg News staff for this story: Jeanny Yu in Hong Kong at jyu107@bloomberg.net