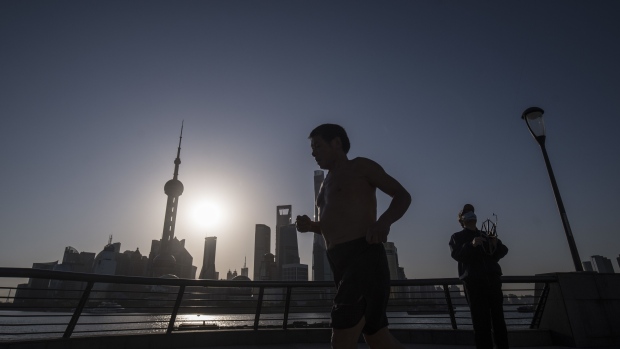 A runner jogs past a man flying a kite on the Bund as skyscrapers of the Pudong Lujiazui Financial District stand across the Huangpu River during sunrise in Shanghai, China, on Friday, March 20, 2020. Most of China is now considered low risk and should return to normal work and life, Premier Li Keqiang said at a government meeting on the coronavirus, which is spreading rapidly in Europe, the U.S. and elsewhere. , Bloomberg

(Bloomberg) -- Investors are bracing for China’s stock market reopening Wednesday after a two-day holiday, with traders finally able to price in the impact of China Evergrande Group’s debt crisis on the nation’s shares.

The world’s largest developer missed interest payments due Monday to at least two of its largest bank creditors, taking the cash-strapped company a step closer to a debt restructuring. Fears that an Evergrande collapse might spark financial contagion and curb growth in the Chinese economy roiled global markets on Monday.

Evergrande Watchers May Finally Get a Hint About China’s Stance

The Hang Seng Index has fallen 2.8% so far this week, slumping on Monday before paring losses somewhat Tuesday. A gauge of property stocks is down 3.9% over that period. Two of the largest global ETFs tracking Chinese shares have slid more than 2% each since Friday’s close while FTSE China A50 futures have dropped about 2.6%.

Here is what a selection of market participants are expecting:

“Despite a government bailout of Evergrande being widely expected given the social costs of a fallout, we will see onshore equity holders play catch up with the selloff in offshore listings. Further, in any restructuring bond holders will have priority over equity holders providing yet another reason for the latter to sell.”

Margaret Yang, a strategist at DailyFX:

“It should be a gap down today for A-shares. Evergrande may trigger systemic risk in the financial system. This makes it’s default different from all else. It is huge. People are preparing for the worst.”

GF Securities strategists including Dai Kang write in a note:

The systemic risk is limited but Evergrande may lead to concerns on the property sector. Recommend buying low valuation stocks on dip amid market fluctuation.