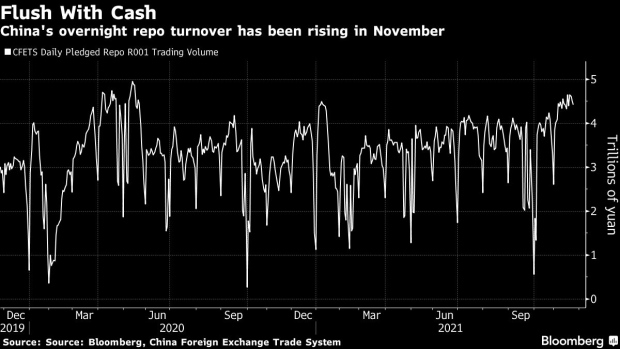 (Bloomberg) -- China’s financial institutions are once again boosting leverage to wager on everything from government bonds to corporate debt. But this time around, the central bank looks unlikely to intervene.

The turnover of overnight repurchase agreements has climbed above 4 trillion yuan ($626 billion) on each of the the past 18 days, the longest stretch on record, according to official data. That sort of volume is often associated with a buildup in leverage in the interbank market, as the contracts are a popular way for financial firms to access short-term funding for bond investments.

While an increase in leverage usually concerns Beijing, analysts say policy makers are set to stay on the sidelines at least for the near future. That’s because the People’s Bank of China aims to keep liquidity loose to aid an economic recovery that has stuttered in recent months. In this sort of environment, the carry trade of borrowing cheaply in the interbank market and buying high-yield bonds is set to remain lucrative.

“As long as there’s room to make a profit from this carry trade, investors will feel motivated to add leverage,” said Kang Chen, fixed income analyst at Northeast Securities Co. “This is a sure bet if traders want to amplify their profits. Traders now prefer to invest in policy bank notes, and also high-quality credit bonds sold by state-owned companies.”

A total 4.3 trillion yuan of overnight repos were traded Thursday, close to the high of 4.6 trillion yuan transacted on Nov. 18 that was the most since May 2020.

Non-bank financial institutions, a term which covers brokerages and fund managers, have been the main driver behind the increase in repo trading, according to Guosheng Securities Co. This month alone, these firms have snapped up more than 300 billion yuan of sovereign and policy bank bonds, and another 240 billion yuan of corporate debt, the company said. These purchases have helped narrow the spread between yields on government bonds and policy bank debt.

If leverage continues to grow, there may come a point when the People’s Bank of China feels compelled to clamp down once again. The central bank has shown in the past one of its major aims is to ensure financial stability by preventing the buildup of bubbles in the bond market. The PBOC ended the previous episode of persistently high repo turnover in January by engineering a liquidity squeeze that sent short-term funding costs to the highest level in six years.

For the time being, the chance of heavy-handed intervention is seen as relatively low. “Risks associated with leverage in the bond market are under control,” said Yewei Yang, an analyst at Guosheng. “We don’t expect the PBOC to start tightening just because of the surge in the transaction of repo contracts.”