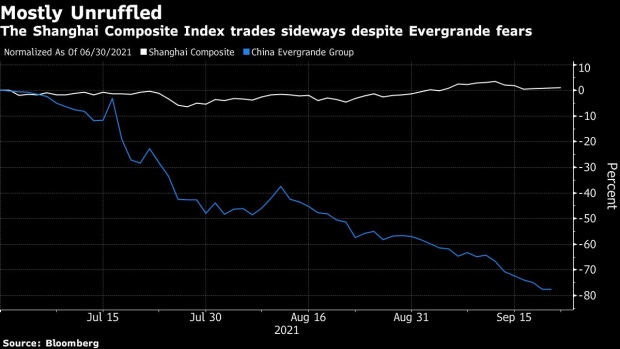 (Bloomberg) -- The China Evergrande Group crisis may hurt fewer companies than widely anticipated, with investors on the mainland expecting the fallout from the property developer to be ring-fenced.

Here is a rundown of the areas where Chinese investors see more damage given their links to Evergrande and Beijing’s tighter scrutiny of the property sector, even as they bet the government will keep spillover risks in check.

Worries are rife about a spike in banks’ bad assets should Evergrande default. The financial subgauge of the CSI 300 Index has fallen 5.5% since protests broke out last week on the firm’s overdue wealth management products. China Merchants Bank Co. and financial conglomerate Ping An Insurance Group Co. have been among the biggest drags on the benchmark.

Lenders have sought to soothe market concerns via replies on Q&A websites run by the bourses. Bank of Jiangsu Co. said its lending was “sufficiently” backed by collateral, while China Everbright Bank Co. said risks were under control. Ping An Insurance Group Co. said its insurance funds have “zero exposure.”

Listed national banks had a total of 7.2 trillion yuan ($1.1 trillion) in outstanding corporate real estate loans at the end of June, just 6.3% of their on-balance-sheet lending, China International Capital Corp. analysts including Zhang Shuaishuai estimated. Risk exposure to a single large client would not be sufficient to disrupt major banks’ operation or earnings, they added.

The Evergrande incident is unlikely to evolve into a systemic risk and if history is any guide, Chinese authorities may take actions to stabilize the market and contain contagion fears, according to a report by Industrials Securities Co. analysts including Zhang Qirao.

The Shanghai Stock Exchange Property Index has been trading below its book value since the end of March as home sales dropped amid tightening policy to restrain the sector’s debt expansion. Beijing’s more recent campaign to close the wealth gap and increase affordable housing supply also means property price surges seen in the past decades become rather unlikely going forward.

While the Evergrande turmoil may hurt smaller developers, the sector should have come to terms with a slowdown as that’s been “a process in the making for over a year now,” said Jiang Liangqing, managing director at Zhuhai Greenbamboo Private Fund Management Co.

The gauge of developer stocks tumbled to a five-year low in July. It has since rebounded on bargain hunting, but is still down about 10% from a February peak.

Shares of Skshu Paint Co. have nearly halved since the firm revealed in late June it had overdue bills owed by Evergrande. Suzhou Gold Mantis Construction Decoration Co. has seen its stock fall almost 10% to a nine-year low since disclosing on Aug. 31 the developer had missed 60.4 million yuan in commercial bill payment.

Evergrande’s crisis may intensify cash shortages at consumer construction material companies that expand rapidly, although a cutoff of all business dealings with the developer should have limited impact on the sector’s income growth, TF Securities analysts including Bao Rongfu wrote in a note.

For appliances makers that are highly reliant on new home transactions to drive sales, the knock-on effect of a weak real estate sector is clear. Equities of Gree Electric Appliances Inc. of Zhuhai and Midea Group are 45% and 38% off from this year’s highs, respectively. An ETF of household appliances has plunged to the lowest in over a year.

The retreat reflects concerns over sluggish demand rather than fears about a full-blown credit crisis, GF Securities analysts including Dai Kang wrote in a note. Retail sales of home appliances shrank 5% on year in August as consumers cut back on spending amid stringent virus controls, while construction investment fell in first eight months due to the government’s property curbs.