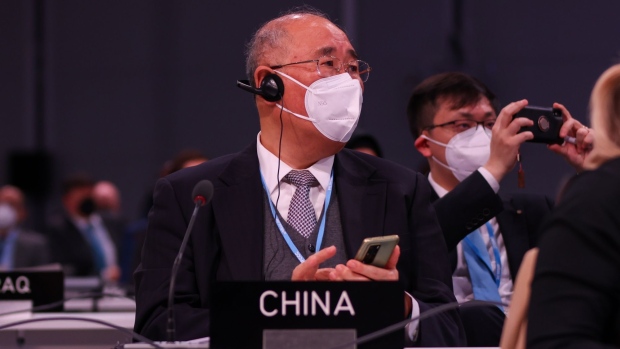 Xie Zhenhua, China’s special envoy for climate change, during the COP26 climate talks in Glasgow, U.K., on Monday, Nov. 1, 2021. Climate negotiators at the COP26 summit were banking on the world’s most powerful leaders to give them a boost before they embark on two weeks of fraught discussions over who should do what to slow the rise in global temperatures. , Bloomberg

(Bloomberg) -- China and the U.S. issued a joint declaration agreeing to work together to step up climate action this decade, pointing to one area of cooperation even as bilateral relations remain tense.

The countries have reached consensus at COP26 on many climate issues and are in agreement on the need to tackle methane and illegal deforestation, China’s special climate envoy Xie Zhenhua told reporters on Wednesday in Glasgow.  The nations will establish a working group to increase action in the 2020s which will meet in the first half of next year.

The announcement came as a surprise in Glasgow, where negotiators are in the midst of fraught discussions over how to accelerate measures to curb the rise in global temperatures. It was a bilateral agreement between the U.S. and China that paved the way for the landmark Paris Agreement in 2015.

"The big significance of this is geopolitical,” said Nick Mabey, co-founder of think tank E3G. “This high-profile commitment puts pressure on both countries to move their positions to make COP26 a success."

The two countries reaffirmed the temperature goals of the Paris accord and recognized there is a gap between current policies to curb emission and what needs to be done, Xie said. Both are committed to pushing for a successful COP26, including agreements on climate finance and rules to create a global carbon market, he said.

Still, China declined to join the global pledge being pushed by the U.S. and the European Union to cut methane emissions 30% by 2030 from 2020 levels. Xie said China will develop its own national plan.