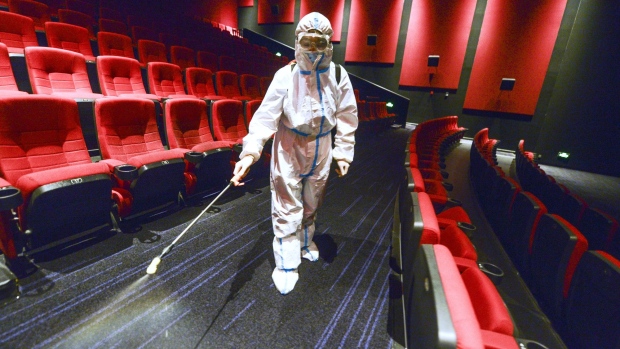 (Bloomberg) -- Chinese officials must avoid becoming “slack” and “war weary” when it comes to fighting Covid-19, according to a top Communist Party newspaper, as more tourist destinations -- including the capital of the contentious Xinjiang region -- impose restrictions aimed at stamping out cases.

The state-run Economic Daily made the call in a front-page commentary Wednesday, noting that unlike Western countries China’s approach to quelling the virus seeks to prevent deaths and protect people’s health. The article, which acknowledged pandemic controls were having an impact on people’s lives, follows a meeting of the Politburo last month, where the strict Covid Zero policy was reinforced by China’s top leaders.

Still, the number of new infections continues to rise. Mainland China reported 952 local cases on Wednesday, more than three times the number seen a week ago.

China continues to roll out a hardcore playbook of movement restrictions, mass testing and surveillance as it seeks to halt a raft of outbreaks flaring in traditional tourist hotspots across the country. Urumqi -- the capital city of Xinjiang and a popular destination for Chinese travelers for its proximity to the famed Silk Road -- locked down six of its eight major areas for five days, with taxi and public transport services suspended in those areas.

The region reported 122 Covid cases on Wednesday. A local official said some of infections were thought to have been brought in by tourists from elsewhere in China, according to Radio Free Asia.

Authorities also locked down other tourist hot spots in China, which had been seeing strong demand for domestic travel given Covid Zero rules left the international border effectively closed. Lhasa, the capital of Tibet, rolled out a mass testing drive Monday after shutting down parts of the city, including the famed Potala Palace, the traditional winter residence of the Dalai Lamas. Bars, karaoke clubs and other public gathering places have also been shuttered.

China’s largest outbreak with 570 cases now is in Hainan, a tropical island in the south known for its beaches and duty-free shopping. Some travelers who had been stranded in Sanya, a popular tourist spot on Hainan’s southern tip, since flights were canceled and restrictions imposed last week were able to leave Tuesday, with more departures expected. Those still there are subject to frequent mass testing and curbs on their movements, with a clear PCR result required to go to the beach.

(Updated with daily case numbers in the third paragraph)