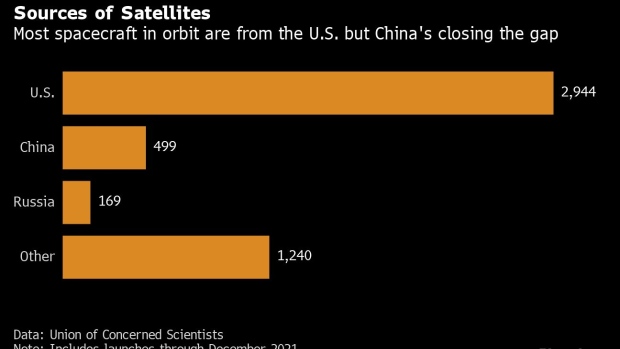 (Bloomberg) -- “There’s going to be a new world order out there, and we’ve got to lead it,” US President Joe Biden said after Russia’s war in Ukraine upended global geopolitics. Far from Earth, that transition is already happening.

Just like in the era of Sputnik and Apollo more than half a century ago, world leaders are again racing to achieve dominance in outer space. But there’s one big difference: Whereas the US and the Soviet Union hashed out a common set of rules at the United Nations, this time around the world’s top superpowers can’t even agree on basic principles to govern the next generation of space activity.

The lack of cooperation between the US and China on space exploration is particularly dangerous in an era where the cosmos are becoming more crowded. Billionaires like Elon Musk and Jeff Bezos along with emerging markets such as Rwanda and the Philippines are launching more and more satellites to bridge the digital divide and explore commercial opportunities.

The stakes are even higher when it comes to the US and China, which are erecting economic barriers in the name of national security as ideological divisions widen over the pandemic, political repression and now Vladimir Putin’s war. Their inability to cooperate on space risks not only an arms race, but also clashes over extracting potentially hundreds of billions of dollars’ worth of resources on the moon and elsewhere.

“Our concern in the West is more about who sets the rules of the road, particularly access to resources,” said Malcolm Davis, a former official with Australia’s defense department who now researches space policy at the Australian Strategic Policy Institute in Canberra.

“The biggest risk is you have two opposite set of rules,” he said. “You could have a Chinese company on the moon in the 2030s claiming territory with a resource on it, in the same way the Chinese have claimed the entire South China Sea.”

The geopolitics of space, once a frontier that brought rivals together for the good of humankind, are now mirroring the competition on Earth pitting the US and its allies against China and Russia. And just as Beijing and Moscow have blamed American military alliances in Europe and Asia for stoking tensions over Ukraine and Taiwan, Chinese state-run media has warned the US now wants to set up a “space-based NATO.”

At the center of the dispute is the US-drafted Artemis Accords, a non-legally binding set of principles to govern activity on the moon, Mars and beyond. The initiative, which NASA says is grounded in the 1967 Outer Space Treaty, forms the foundation of the space agency’s effort to put astronauts on the moon this decade and kick-start mining operations of lucrative lunar elements.

So far 19 countries have agreed to support the accords, including four — Romania, Colombia, Bahrain and Singapore — that signed up after Putin’s invasion spurred a US-led effort to isolate Russia. Underscoring the divide, Ukraine was an early Artemis club member after President Volodymyr Zelenskiy’s government signed in late 2020.

The accords are part of an effort by the Biden administration to establish “a broader and comprehensive set of norms” for space, Vice President Kamala Harris said in an April 18 speech at Vandenberg Space Force Base, about 160 miles (250 kilometers) northwest of Los Angeles.

“As we move forward, we will remain focused on writing new rules of the road to ensure all space activities are conducted in a responsible, peaceful, and sustainable manner,” she said. “The United States is committed to lead the way and to lead by example.”

China and Russia have led opposition to the accords, vowing greater space cooperation in early February as part of a “no limits” partnership when Putin visited President Xi Jinping in Beijing shortly before the war began. They are jointly promoting an alternative project on the moon they say is open to all other countries: the International Lunar Research Station.

One of China’s main problems with the Artemis Accords is a provision allowing nations to designate areas of the moon as “safety zones” -- regions on the lunar surface that others should avoid. For the Americans and their Artemis partners, the exclusive areas are a way to comply with obligations under the Outer Space Treaty, which requires countries to avoid “harmful interference” in space.

To China, however, the safety zones are thinly disguised land grabs in violation of international law. Beijing wants any rule-making to be settled at the UN, where it can count on support from a wider group of countries eager for friendly ties with the world’s second-biggest economy.

“It’s time the US woke up and smelled the coffee,” the official China Daily proclaimed in a January editorial that criticized how NASA “invented” the concept of safety zones to allow governments or companies to reserve areas of the moon. “The world is no longer interested in its divisive, hegemonic schemes.”

China has good reason to be suspicious of US efforts in space. American legislation first passed in 2011 prevents NASA from most interactions with its Chinese counterpart, and the US has blocked China from taking part in the International Space Station -- a move that simply prompted Beijing to build its own.

“China was left out of that order and now it’s going its own way,” said Lincoln Hines, an assistant professor at the US Air War College who has studied the Chinese space program. “That raises the challenge as to whether you can have a coherent system of rules in outer space when you have two different visions of order and there isn’t any cooperation.”

The head of the Russian space program, Roscosmos director Dmitry Rogozin, in late April suggested that Russia had decided to quit the International Space Station because of Western sanctions on Russia from its invasion of Ukraine.

While Russia’s space program was already in decline before Putin’s war, China is swiftly moving toward Xi’s goal of matching US capabilities in space. China became the first country to send a probe to the far side of the moon in 2019, and last year it became only the second nation after the US to land a rover on Mars.

On March 10, China launched a Long March rocket from the southern island province of Hainan to deliver cargo to the Tiangong, the orbiting spacecraft that Beijing plans to complete this year — making China the only country to operate its own space station. The following month, Xi ordered officials to build a world-leading spacecraft launch site in Hainan.

“To explore the vast cosmos, develop the space industry and build China into a space power is our eternal dream,” Xi said in the introduction to a white paper on China’s space program released in January, which said China plans to launch a robotic lunar mission around 2025. China may be able to send astronauts to the moon for the first time by 2030, Ye Peijian, chief designer of China’s first lunar probe, told state media at the time.

“China wants really badly to be seen as the NASA of the future,” said Michelle Hanlon, co-director of the Center for Air and Space Law at the University of Mississippi and editor-in-chief of the Journal of Space Law. “It wants to be that leader. China feels that it’s China’s time.”

As the US, China and other nations target the moon, the need to establish rules to avoid conflict is becoming more urgent.

NASA in April conducted tests for the launch of Artemis I, the first American spacecraft to aim for the moon since Apollo 17 in 1972. While this mission will be fully robotic, NASA’s goal is to send astronauts to the moon around 2025 -- including the first woman -- and build a base camp on the lunar surface.

Musk’s Space Exploration Technologies Corp. will conduct a test flight from Texas in the next few months of the company’s new Starship rocket, which SpaceX plans to use to take humans to the moon and Mars.

Japan and South Korea, both Artemis Accords signatories, have lunar missions in the works. So does India, the largest space-faring nation yet to commit to either the American or the Sino-Russian teams. Putin also vowed last month to “restore the moon program.”

“The moon is in play,” said Steven Freeland, vice-chair of a working group on legal aspects of space resource activity for the UN’s Committee on the Peaceful Uses of Outer Space.  Freeland, an emeritus professor of international law at Western Sydney University, expects to see the start of efforts to extract resources from the lunar surface by the end of the decade.

Unlike Earth, the moon may contain large amounts of helium-3, an isotope potentially useful as an alternative to uranium for nuclear power plants because it’s not radioactive. Chinese state media in 2019 said the moon is “sometimes referred to as the Persian Gulf of the solar system,” with experts believing 5,000 tons of coal could be replaced by about three tablespoons of helium-3.

While there’s not yet proof that helium-3 can do what boosters claim, Chinese researchers are already looking for the element in moon rocks brought back to Earth in late 2020 by one of China’s lunar missions. The moon could also prove valuable as a source of water, taken from ice at the lunar poles, to make rocket fuel that could power missions to Mars and other places in the solar system.

For now, the US appears to be ahead in winning over nations to its interpretation of rules for operating in space. As the Artemis Accords gain new signatories, China is still waiting for another leader besides Putin to team up on the International Lunar Research Station.

Chinese state media reported in March that negotiations were underway with the European Space Agency, Thailand, the United Arab Emirates and Saudi Arabia about taking part in the rival moon base. But Russia’s war in Ukraine will likely make the project much less appealing to some nations.

The European Space Agency on March 17 suspended a plan to send a Russian-made lander to Mars in September or October, following UK-based satellite operator OneWeb Ltd.’s cancellation of plans to launch its low-Earth orbit satellites aboard Russian rockets.

“The impact on the Russian space program is going to be disastrous,” said Jonathan McDowell, an astrophysicist at the Center for Astrophysics, which is operated by Harvard University and the Smithsonian Institution.

“We work well with our Chinese friends,” Roscosmos director Rogozin said in an interview with Chinese state-run broadcaster CGTN released on April 4. “To be friends in space, we must be friends on Earth.”

The same appears to hold true for adversaries. In a sign of what could go wrong without a common set of rules in space, the US and China traded accusations in recent months over two incidents last year involving satellites launched by Musk’s SpaceX that Beijing said came dangerously close to its orbiting space station.

After China lodged a complaint with the UN, the US said a notification wasn’t necessary -- implying Beijing exaggerated the risk. That irked China even more, with Foreign Ministry spokesman Zhao Lijian saying the US didn’t reply to emails to discuss the incident and wasn’t “showing the due responsible attitude as a space power.”

The episode points to China’s bigger problem with the Artemis Accords: Beijing is upset about being left out of the process and pressured to accept principles that were crafted by the US instead of at the UN, according to Jessica West, senior researcher and managing editor for the Space Security Index project at Project Ploughshares, the peace research institute of The Canadian Council of Churches.

The conflict over who makes the rules, she added, shows the world has lots of work left to avoid a clash in space.

“I’m not sure people expected the explosion of space activity that happened,” West said. “We’re just not adequately prepared.”